Bob Stoops The Next Head Coach Of FSU? The Rumor Mill Sure Seems To Think So With Alleged Sightings In Tallahassee 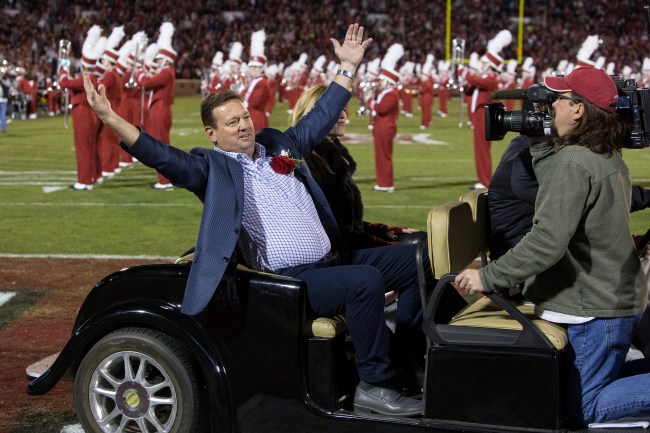 Florida State Football lost to its archrival Miami on Saturday and on Sunday they fired head coach Willie Taggart less than two years into his contract. FSU had to pony up A LOT of money because Taggart’s agent somehow pulled off the greatest contract clause in history that allegedly forced Florida State to pay him 80% of the remaining value of his contract should be fired.

FSU is a blue-chip job. Recruits want to play in Tallahassee. Florida as a state is RICH with 4 and 5-Star recruits that grew up watching the Seminoles. The ‘Noles are only six years removed from their last BCS National Championship and five years from their last College Football Playoffs appearance.

What’s next for the Florida State Seminoles? Well, the rumor mill sure seems to think it’s former Oklahoma Sooner head coach Bob Stoops who has allegedly been sighted in Tallahassee.

As some have noted on Twitter already, a head coach like Bob Stoops doesn’t go to Tallahassee to interview for the job. If he’s actually in Tally it’s because he’s already accepted the position in theory and they’re ironing out the details.

FSU blog NolesGameday reported that the rumors of Bob Stoops being seen in Tallahassee are legitimate:

UPDATE: Sources close to the program have confirmed to @TheNoleGameday that earlier reports of Bob Stoops being in Tallahassee are indeed correct.https://t.co/8wy9ergj6k

As we reported earlier Bob Stoops is in Tallahassee finalizing a new deal. My sources telling me Kendall Briles remains OC, Jim Leavitt DC. That’s a helluva triumvirate right there. Leavitt and Stoops worked together at Kansas St. Tons of experience and a winning records!! pic.twitter.com/ofNIj42I63

Fans are even tracking local flights in and out of the tiny Tallahassee airport:

I’m glad Bob Stoops made his event at the Hard Rock in time. Air traffic must have been heavy at FLL which may explain the landing in Boca. #noles #NoleNation #gonoles pic.twitter.com/zVBXjMozSC

Nothing is confirmed at all. These are all just rumors. But the rumors suggest that Stoops will be announced on Thursday as the next Head Coach of the Florida State Seminoles, my alma mater.

I’ve sene the University of Tennessee’s football team get absolutely torched with coaching rumors on the past few years so I’m trying to take all of this with a grain of salt, but the prospect of losing to Miami last weekend only to get the venerable Bob Stoops as our new Head Coach has me very interested in FSU Football again.

I’m not the only Noles fan feeling this way right now. FSU fans are jacked up at the thought of Bob Stoops showing up in Tally for the new head coaching job:

Got whooped by Miami Saturday and got Bob Stoops on campus today. pic.twitter.com/e2tjDL8j2S

Dan Mullen when he sees that Bob Stoops is in Tallahassee right now #FSU #UF pic.twitter.com/icqHMxTRhf

I’m sure by the time I hit publish on this article there will be an entirely new set of rumors with someone else’s name floated around as the next head coach of FSU but it does seem like the insiders in Tallahassee sense this won’t be a long search for the next head coach.