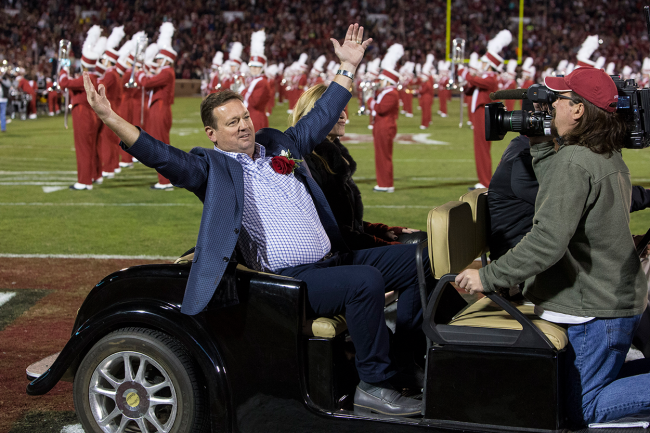 The Stoops family coaching tree runs deep and Payton Stoops is living it up. Payton is the daughter of FAU defensive coordinator Mike Stoops and is also the niece of Oklahoma national champion head coach Bob Stoops and Kentucky head coach Mark Stoops.

The 22-year-old Oklahoma alumnus is currently an account manager for Clubby Seltzers in the OKC area. She is often on the road (or in the air) and makes frequent appearances at her alma mater.

The same goes for Boca Raton. She gets down to Florida and watches her dad as often as she can.

(Side note: Payton’s TikTok profile is full of all kinds of great content.)

No matter where Payton is, she is loving life. That is especially true after her uncle Bob was named Oklahoma’s interim head coach.

Bob Stoops, who served as the Sooners’ head coach from 1999 to 2016, went 190-48 in his career. He was inducted into the College Football Hall of Fame earlier this week and Payton was in attendance.

Less than a month prior, however, Bob returned to his old office after the departure of Lincoln Riley. Oklahoma is set to play in the Alamo Bowl against Oregon on December 29th and needed to name an interim head coach.

Bob got the call, accepted and is set to make a lot of money to coach the bowl game.

As the news broke, Bob’s niece got quite a few texts.

In a semi-viral TikTok video, Payton shared some of the messages received. The video, captioned “POV: Your Uncle is the King of Norman, OK currently,” features a song that sings “life’s so fun” in the background. She is living it up.

The first ones my favorite #fyp

Oklahoma has since hired Brett Venables as its new head coach to replace Riley and, in turn Stoops. It is by all accounts a great hire.

Stoops is still the interim head coach, despite the new hire. Will Payton be in attendance? Probably. Will she be having a blast? Probably.