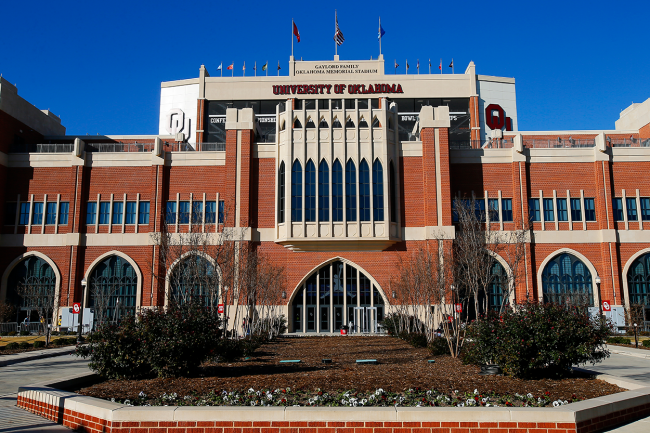 Lincoln Riley is no longer the head coach of Oklahoma football. The 38-year-old accepted the same position at Southern California on Sunday and arrived in Los Angeles on Monday morning.

Now that he is gone, former Sooners head coach Bob Stoops will be serving at the interim head coach for the upcoming bowl game. As a result, he will get to sit back in his old chair.

Whoever is hired to take over for Riley and Stoops will inherit one of the nicest offices that you have ever laid eyes on. The office, which is located inside the team facilities attached to Oklahoma Memorial Stadium, is tricked out to the nines.

For starters, the high-ceiling space features ceiling-to-floor windows that overlook the practice field.

And then, when you get into the details, it’s rather spectacular. The open floor plan has two TVS, one on each wall, that sit in the middle of two trophy shelves.

The left wall features a fireplace under the TV. The head coach’s desk sits under the TV on the right wall.

Nobody is even talking about the fact that Lincoln Riley is gonna need a bigger office. The one he’s in now can only hold so much hardware. 🤷🏻‍♂️ pic.twitter.com/khMhgPPAZL

Between the two walls on either side, shiny leather couches and chairs create two sitting areas. One is more casual, facing the fireplace. The other is positioned in the middle of the room and allows for more seating.

Fox Sports analyst Joel Klatt toured what was Riley’s office at the time, and it’s pretty spectacular. Obviously, whoever takes over for Riley likely will not have the same hardware to decorate the space.

Beyond the head coach’s office, the team facilities aren’t too shabby either. Oklahoma spent a lot of money to beef up its facilities just a few years back and it paid off.

There is no telling who will replace Riley in Norman, but he is set to take over a great office, with great team facilities for a program that is preparing to join the SEC. It is undeniably a more difficult job in the SEC, which is part of the reason why Riley left, but the opening is certainly one of the top in college football.