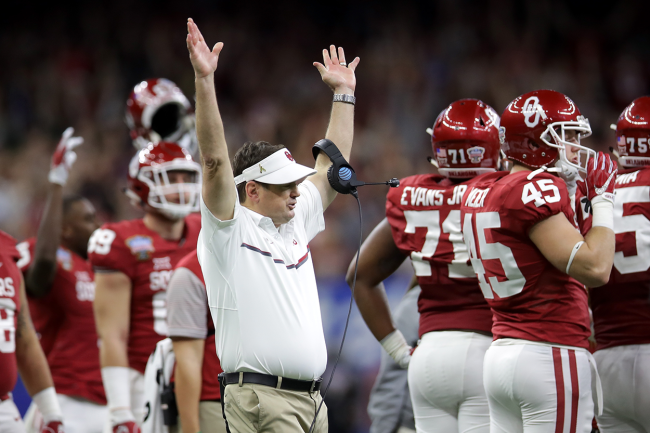 Bob Stoops is coaching one game for Oklahoma and is getting paid a lot of money to do so. The 61-year-old head coach is serving as the interim head coach after Lincoln Riley bounced for Los Angeles. He previously served in that role from 1999-2016 and won a National Championship in 2000.

Stoops, who is stepping into his old office, will lead the Sooners for a bowl game. With two losses, they are out of the College Football Playoff mix, but will likely be invited to play in the Alamo Bowl against another Top 25, if not Top 15 team.

Win or lose, Stoops is going to get a nice payday.

That comes out to $325,000 for the entire interim period. That number, reportedly, is based on Riley’s former contract, which he signed for $45.2 million over six years in July 2020.

However, Stoops reportedly was not interested in compensation. He is set financially and looked forward to the opportunity to put on his old headset simply for love of the game and his Sooners.

Per a report from The Athletic’s Oklahoma beat writer Jason Kersey, Stoops declined payment on two occasions. He was willing to do it gratuitously. Oklahoma said no, and are planning to pay him anyway.

Joe Harroz: Bob Stoops “twice refused” to be paid for his services as interim head coach. But they stopped asking him and are paying him anyway.

This feels a lot like a birthday party where the host says no gifts, but people bring them anyway. Despite his refusal, Stoops is set to make more than the average American in just five days. College football is insane.