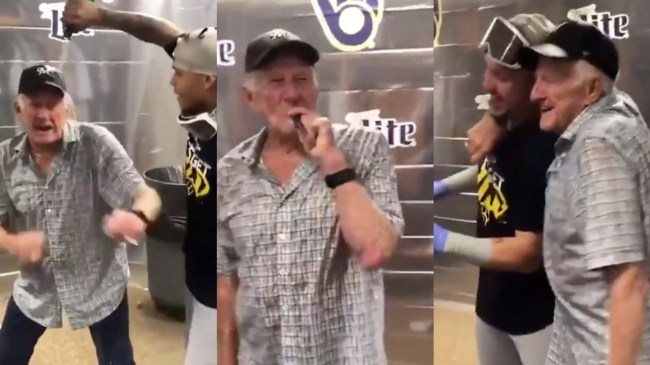 As Brad Pitt famously says in Moneyball, “how can you not be romantic about baseball?” And this moment right here is very much in that vein.

This is why, despite all of its flaws, baseball is unlike any other American sport we have — its roots are generational.

The man you see in the image above and the video below is a man by the name of Bob Uecker, otherwise known as “Mr. Baseball”, which is a nickname that was given to him by none other than legendary The Tonight Show host Johnny Carson.

Mr. Baseball is the play-by-play announcer for the Milwaukee Brewers and has held that title since the year 1971. For a little further perspective on just how long ago that was, Richard fucking Nixon was President of the United States when Uecker started calling games for the Brewers. That, folks, is called job security.

And after Uecker’s beloved Brewers secured a National League Wild Card berth on Wednesday night following their 9-2 victory over the Cincinnati Reds, the clearly still-young-at-heart announcer found himself in the thick of the celebrations, getting doused in champagne as he toted around a stogie that he desperately tried to keep dry.

Bob Uecker enjoyed himself at the Brewers' clinching celebration 😆🍾

The move you’ve all been waiting for is back! #MKEHistory pic.twitter.com/k3iMpK0SBO

While Major League Baseball may never be what it was when Uecker started calling games, it still has the potential to conjure up humanly nostalgic moments like this that reminds us of just how special baseball can be.

It doesn’t matter if you’re 15-years-old, 45-years-old, or 85-years-old, baseball has this unique ability to make you feel like a kid inside, and Bob Uecker’s pure joy is a prime example of that.