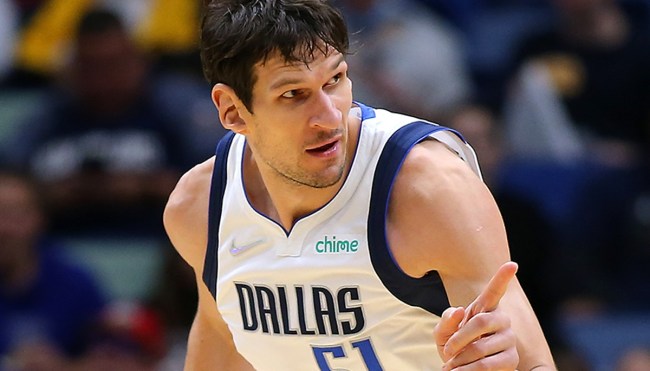 The nature of basketball has always made the sport a haven for some absolutely massive human beings, and while the introduction of the three-point line and the subsequent focus on the long-range game has evened the playing field a bit, there’s a reason plenty of NBA teams have signed some literal giants to their roster over the years.

At 7’7″, Gheorghe Mureșan and Manute Bol are tied for the distinction of the tallest person to ever play in the league (the latter was briefly teammates with Muggsy Bogues, the 5’3″ guard who remains the shortest player in its history). However, there are plenty of others who’ve managed to tower over the rest of the competition.

That includes Boban Marjanovic, the 7’3″ Serbian who was a member of the Dallas Mavericks when this article was originally written but was traded to the Rockets about 24 after his former team milked him for internet clout.

The man many people refer to simply as “Boban” has managed to become a fan favorite since he made his NBA debut with the Spurs in 2015, and a video that was recently shot at a basketball camp hosted by the Mavs perfect sums up why he’s so beloved.

On Tuesday, the team posted a compilation of a bunch of kids who got the opportunity to try to score on the big man, and, well, it went about as well for them as you’d expect.

Bobi had no mercy at hoop camp 😂 🚫@ChickfilA | @BobanMarjanovic pic.twitter.com/h481zvC7oD

Boban harnessed the same “F—k them kids” mentality that Patrick Beverly adopted when he played pickup with some similarly outmatched children earlier this month, as every single camper who tried to score on Marjanovic was treated to an effortless block.