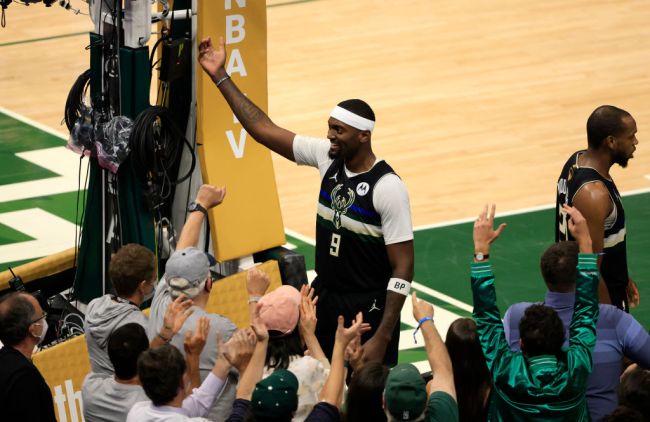 For the first time in half of a century, the Bucks are NBA champions. After falling behind 2-0 to the Suns, Milwaukee came back to take the series 4-2.

Giannis Antetokounmpo not only made good on his promise to his city and to Kobe Bryant, but he became only the second player in history to score 50 points in a closeout game. In doing so, he punched his ticket to the NBA Hall of Fame at 26 years old.

While Antetokounmpo put the team on his back, his eight-year teammate Khris Middleton seemingly hit every clutch shot imaginable.

Right behind Middleton in scoring was Bobby Portis, who has become something of a cult hero in the city. He signed with the Bucks during the offseason and everybody in Wisconsin — and even beyond the state — loves him. It’s easy to see why.

After winning Game 6, Portis and Pat Connaughton celebrated in the locker room accordingly. During their postgame interview, Portis sat down with a big bottle of booze.

When NBATV’s Kristen Ledlow asked the two how much champagne they had consumed, they both looked at each other and laughed. Portis hit the interview crew with a shrug.

Kristen: "How much champagne have you had tonight?"
Pat & Bobby: "BWAHAHAHAHAHA" pic.twitter.com/x4zsBfthz6

The entire moment was hilarious and well-deserved. Throughout the entire season, and particularly the playoffs, Portis’ name was often chanted by fans in the arena. After winning the title, Portis shared his gratitude.

"Coming here was the best thing to ever happen to me." – @BPortistime pic.twitter.com/JEAZ15WOBT

He loves the chants.

"I love those Bobby chants, man."

This means a lot to Bobby Portis. 🏆#NBAFinals presented by YouTube TV pic.twitter.com/lbOjokGfdD

It’s not hard to understand why everybody loves Portis so much. He is a humble player who came from a difficult upbringing in Little Rock, Arkansas and made it out of the mud by doing things his own way.

When he was 15 years old, Bobby Portis grew tired of a man getting physical with his mom, so he fought him. Family packed up and left. He told me he just wanted better for her and his siblings. That’s what drove him. That dude went through some real stuff. So happy for that dude.

Reminder that Bobby Portis has a tattoo of Bobby Portis in a Razorback jersey looking up to the Little Rock skyline 🐐 pic.twitter.com/CCij9zI7qM

In addition to his passion, Portis has been an important factor in Milwaukee’s championship run and his antics have been entertaining along the way.