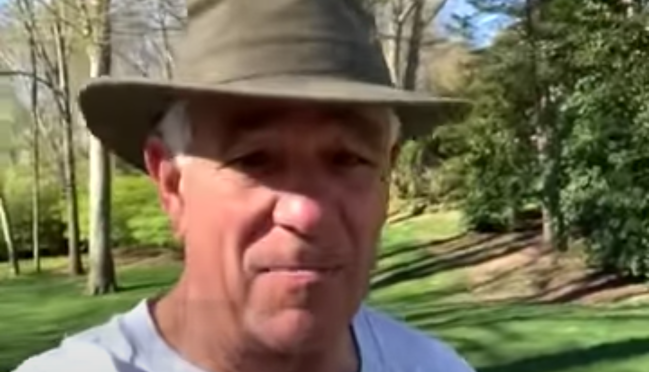 Valentine, who is currently running for mayor in his hometown of Stamford, Connecticut (yes, the same one from The Office), is also on Cameo. The video app allows celebrities and personalities to send personalized messages to paying fans.

Well, Valentine captured himself fleeing the scene of his dog pooping in his neighbor’s yard on an eight-minute Cameo video that he unintentionally left recording— and then, even more strangely, sent in.

The vast majority of the video is crotch shots of Valentine’s sweatpants, so you have been forewarned. Nevertheless, it’s really funny and worth the watch.

Breaking down the tape.

Valentine starts the video by greeting a man named Matt, who must have requested the video. He stumbles through his opening monologue and then clearly tries to stop the recording because of the flub-up. He doesn’t.

Moments later, Valentine spots a neighbor and stops to shoot the shit.

“Three years working at that fucking thing?!” he asks jokingly. The two continue on in the classic suburban neighbor jibber-jabber back and forth for a little while before Valentine continues his walk.

Mind you, the camera is still recording the whole time. Around the six-minute, 20-second mark, things really get interesting.

He pauses for a moment as what appears to be a passerby walks past him before continuing on with the rapid-speed walk. At the end of the video, around the eight-minute, 10-second mark, he says “we’re going to have to start bringing a bag.”

The entire exchange is laugh-out-loud funny. There is no justifiable reason that Valentine should have submitted the video to Cameo, but some lucky guy named Matt stumbled into comedic gold.