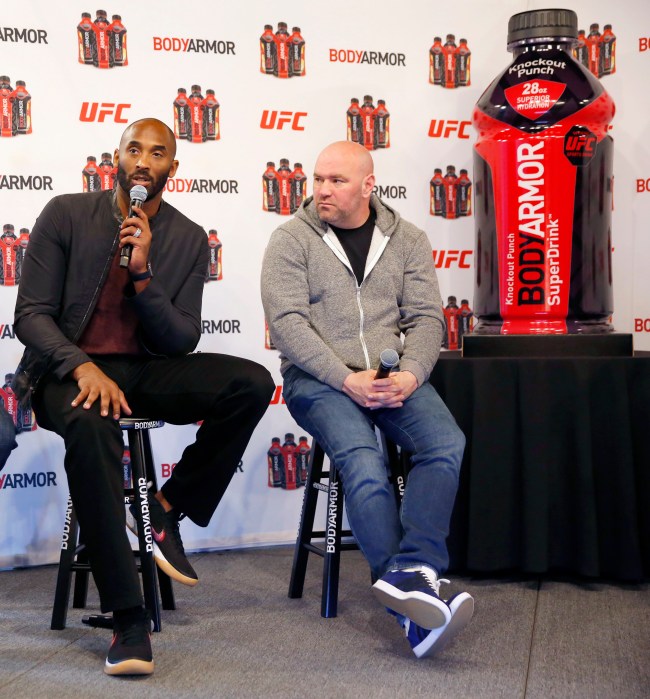 BodyArmor has rolled out its largest ad campaign to date (includes 1st TV ad), a comedic series portraying market leader Gatorade as out of touch with the needs of the modern athlete; to run during the NBA Playoffs. Conceived, written and co-directed by shareholder (and Emmy/Oscar winner) Kobe Bryant, the multi-media campaign places athletes in outdated situations; akin to high performance athletes continuing to drink Gatorade during competition (think: Porzingas using carrier pigeons to communicate with family in Latvia, video here). The campaign positions BodyArmor as the sports drink for today’s health conscious athlete, touting differences like “natural flavors and sweeteners, potassium-packed electrolytes and coconut water”; while noting the lack of innovation from Gatorade since its inception in 1965.

Howie Long-Short: BodyArmor remains privately held, but you can play the company via Dr. Pepper Snapple Group (DPS); as the company participated in a $20 million funding round in August ’15. DPS is the company’s 2nd largest shareholder, controlling 15.5% after a $6 million investment in 2017. The company will report Q1 earnings on Wednesday 4.25.18.

BodyArmor is growing rapidly, having generated $122.9 million “in the 52 weeks ending March 19” (+140% YoY). Gatorade (75%) and Powerade (20%) still control the bulk of the “sports drink” market share, with BodyArmor a distant 3rd (2%); but CEO Mike Repole projects the company will own 10% of the market by 2019, a distinct possibility after having recently added 7-Eleven, Walmart and Sam’s Club as distribution partners. For those wondering, Gatorade is owned by PepsiCo. (PEP); Powerade is a subsidiary of the Coca-Cola (KO) Co.

Spurs Coach Greg Popovich didn’t make the list, but perhaps BodyArmor execs should reach out to him; as he too has recently taken aim at Gatorade. Popovich made it known that he’s not a fan of the “sugary” drink and that he remains unhappy the league’s placement of Gatorade on the post-game press conference podium. The outspoken coach said he “shouldn’t be forced to sell” their products.

Stars Group, Inc. (TSG) has acquired Sky Betting & Gaming (SBG) from CVC Capital Partners and Sky, Plc (SKYAY) for $4.7 billion in cash and stock options, as the company pivots from online poker cardroom to sports betting operator. SBG has an established gaming presence in the U.K. (3rd largest operator) and recently expanded operations in to Italy and Germany. While SCOTUS’ pending decision on PAPSA’s constitutionality offers potential upside for TSG shareholders, CEO Rafi Ashkenazi clearly stated, “the trigger for this deal was not the U.S.”; before adding that should sports betting be legalized in the country, the company would be “very strongly positioned to capture significant market share.” TSG shares climbed 14% on the news, closing Monday at $33.45; just below their all-time high ($33.50).

Howie Long-Short: Ashkenazi has been aggressively looking to reduce TSG’s reliance on a stagnating poker business (2/3 of ’17 revenue, $2.36 billion, +7% YoY) and recently increased the company’s stake (to 80%) in Australian sports betting and gaming company, CrownBet Holdings (which acquired the Australian arm of William Hill). That’s a wise decision. In 2017, 50% of all casino winnings ($49.8 billion) came from sports betting and 26% originated from casino games, while just 6% came from poker.

Much like the DFS companies, TSG owns a valuable database of U.S. gamblers from poker’s mid-to-late aughts heyday. Combine that information with SBG’s strengths in marketing (was U.K.’s 8th largest operator in ’11, now 3rd) and technology (80% of revenue comes from mobile apps), and it becomes a particularly sensible acquisition for TSG.

Fan Marino: No European gaming company is better positioned to capitalize on legalized sports betting in the United States (particularly if SCOTUS’ decision is limited to New Jersey, for the time being), then William Hill (WIMHY). Back in ’13, the company bought the rights to run a sportsbook (and split profits 50/50) at Monmouth Park (NJ), if ever permitted by law for $1 million. It’s been a long 5 years, but a decision could come down as early as today. Should that happen, WIMHY will be taking bets at Monmouth within weeks. The company also plans to add a 2nd $5 million sportsbook on the premises.