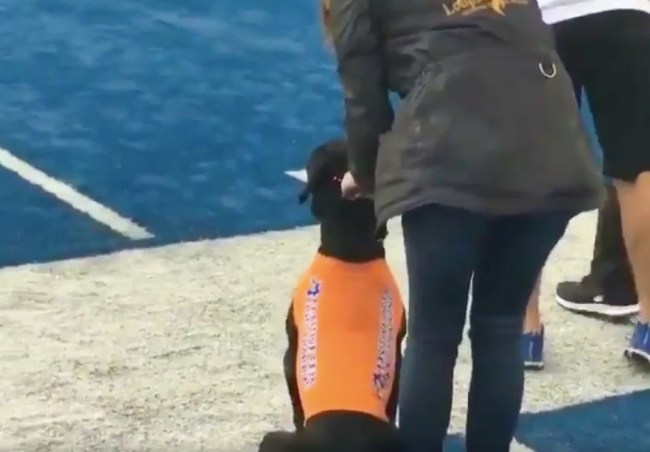 Boise State Football is 2-1 on the season with big games coming up in the next three weeks against UVA, rival BYU, and San Diego State. One member of the team is ready for the challenge, and he’s a heckin good pupperino.

I didn’t watch Boise State beat New Mexico over the weekend but I’ve seen the most important highlight from the game. The Boise State Broncos have a dog on their team whose job is to retrieve the kicking tee after kickoffs. This dog is really heckin good at his job, and he’s gone viral almost overnight.

There’s a tweet from the sidelines that shows this dog in action and it’s already picked up over 150,000 retweets since Boise State’s last game:

Boise State has a dog who retrieves the tee after Kickoffs and I've never seen anything so pure pic.twitter.com/J4wBy3dgzY

The responses on Twitter to that original tweet of the kickoff tee-retrieving dog are pretty spectacular. It turns out that UC Davis also gets in on this action, and they have a dog of their own:

UC Davis does too, his name is Pint and he's also our Vet Med school mascot! pic.twitter.com/eP4xryRZ5O

I suppose now would be the time to remind everyone that even though this Boise State dog is a very good dog, they’re all good dogs. I’d also like to remind everyone that while dogs are awesome, FSU has a horse they use to spike a flaming spear on the 50-yard line before games and as far as animals go during college football games, it’s impossible to top that.