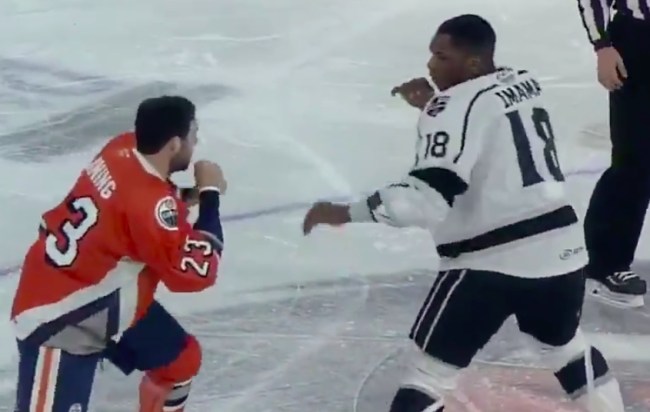 Compared to sports that really only require people to pick up a ball if they want to play, ice hockey isn’t exactly the most accessible activity in the world, as acquiring the equipment you need requires a comparatively hefty initial investment, and unlike soccer fields or basketball courts, you normally have to shell out even more dough to access the frozen sheet of water required to partake if you don’t have the “luxury” of living in a perpetually frigid environment.

This economic element results in a fairly high barrier to entry that puts historically underprivileged segments of the population at a disadvantage, and while geographical and cultural aspects also play a hand in the general demographics of those who play the game, it’s not exactly a secret that the hockey world is blindingly white compared to other sports.

To say the NHL lacks diversity would be the ultimate understatement, and if you need any proof at just how underrepresented minorities are, I’d direct you to the video the league recently released to celebrate Black History Month that features a grand total of zero black players.

One of the two commercials. pic.twitter.com/UFzT7ocREQ

Hockey has been at the center of multiple scandals concerning racism this season, as Calgary Flames coach Bill Peters resigned after former player Akim Aliu accused him of repeatedly using slurs against him during his time in the league and “Hockey Night in Canada” legend Don Cherry was forced to find a new outlet for his flamboyant suits after he was fired for questionable comments concerning immigrants.

Last month, the AHL also found itself with a scandal on its hands after Bakersfield Condors defenseman Brandon Manning was suspended for five games after he hurled a slur of his own in the direction of Boko Imama during a contest against the Ontario Reign.

On Saturday, the two teams faced off for the first time since the incident and Imama wasted no time taking Manning to task, as he dropped the gloves a couple of minutes into the first period and proceeded to give Manning a healthy dose of karma in the form of a series of flying fists.

Brandon Manning was suspended for using a racial slur against Boko Imama. In Manning's first game back, Imama destroyed him in a fight 😱👊 pic.twitter.com/5guTlP4UJe

You’ve really got to love a good feel-good story.