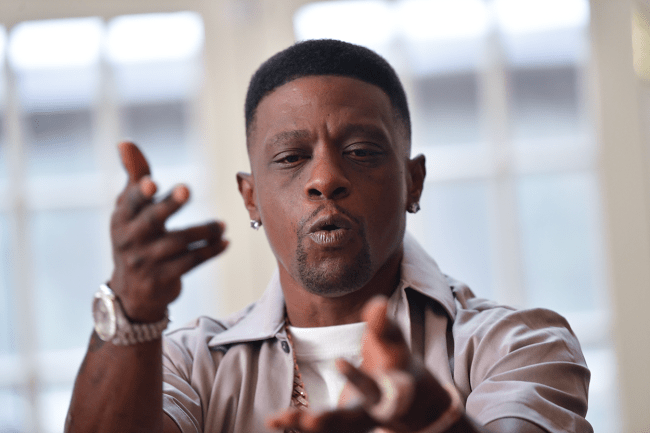 Boosie Badazz went back to school and now he doesn’t want to leave. The 39-year-old rapper, who is most highly regarded in the south, traveled to Jackson Sate University over the weekend.

Boosie has strong ties to Jackson and was invited to join the school for Saturday’s Soul Bowl rivalry against Alcorn State. At the forefront of the football program, of course, is head coach Deion Sanders.

Coach Prime has completely changed the culture of the team and has turned the HBCU into a powerhouse in his first full fall season.

The Tigers beat the Braves by 14 on Saturday and moved to 10-1 on the year. For the first time ever, Jackson State is a legitimate threat on the FCS level and will play for a SWAC Championship.

Saturday’s game was a testament to what Coach Prime has done in a short time. It was a sold out crowd and they were ROCKING.

At halftime, it was the Sonic Boom of the South’s time to shine. Jackson State’s marching band is one of the best in the country and they go hard week-in and week-out.

As the Sonic Boom took the field, it was joined by a special guest— Boosie. Boosie was straight boolin’ with the band and went so hard.

Boosie performing ‘Set It Off’ with the @SonicBoomOTS is unbelievably lit 🔥pic.twitter.com/PGtWvi5zP1

After the game, Boosie had an announcement.

“I’ve been coming to Jackson since I was 14, and I love y’all,” he said. “Y’all love my stanky drawers and I love y’all back. And I just wanted to tell y’all that y’all always been supportive of me and it’s a big secret I was going to let it out, but I’m enrolling in Jackson State next semester.”

Boosie earned his GED certificate while he is in prison in 2013. Now he’s planning on getting his degree.