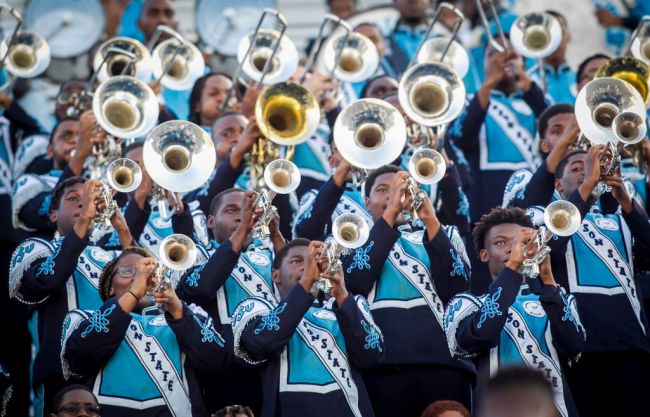 While most of the Jackson State headlines are following head football coach Deion Sanders and his 2-0 program, that hasn’t always been the case. Before Coach Prime took over the Tigers, much of the game day experience was about the band.

Despite the team’s success on the field, that continues to be and always will be the case. Jackson State University’s Sonic Boom of the South never fails to get you out of your seat.

The brass-blaring bunch from Jackson, Mississippi performed at the 32nd Southern Heritage Classic over the weekend and faced off against Tennessee State University. Tennessee State’s band, along with all HBCU programs, is impressive.

The Sonic Boom, however, is on a whole different level. They performed a few songs at the Classic but two stood out in particular.

The brass-heavy track is perfect for a marching band rendition and, a week after it dropped, the Sonic Boom performed exactly that. It goes so hard.

Not long thereafter, as part of the Boom’s Classic performance, they played a version of ‘family ties’ by Baby Keem and Kendrick Lamar.

Keem is Lamar’s cousin and Jackson State does them both justice. It’ll blow out your speakers, and if you aren’t too careful, your speaker might just catch on fire.

As the Tigers and Coach Prime continue to find success on the gridiron, let’s not forget about the greatness that has never wavered in the stands.