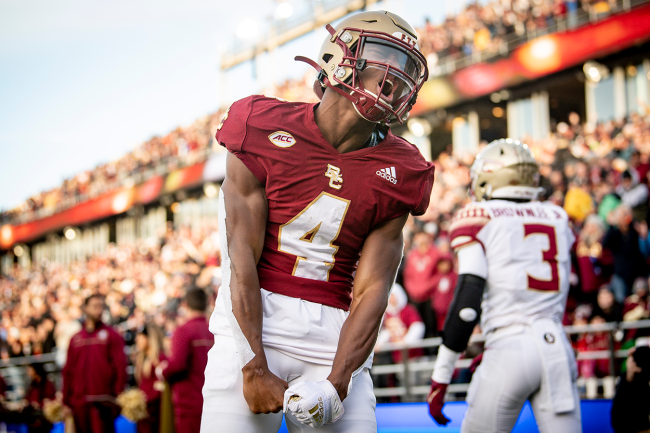 The new era of Name, Image and Likeness is finally allowing college athletes to profit while in school. When the NCAA passed the updated legislature on NIL almost a year ago, it finally put a lot of power back in the hands of the players.

In previous years, schools could exploit their athletes and their talent by selling them as a product without those same athletes seeing any financial return beyond the standard things like scholarship, meals and gear. Now, while play-for-play remains illegal, the athletes can pursue outside business opportunities that give them what they need to operate on a day-to-day bases.

Whether it be money, merch or otherwise, college football players in particular are cashing-in. Take Boston College wide receiver Zay Flowers for example.

Flowers, who was an All-ACC First Team selection as a sophomore last year, might not be a household name. He isn’t a quarterback and his name doesn’t necessarily carry the weight of a Spencer Rattler or even someone like John Metchie or Drake London.

Nevertheless, Flowers is one of the top players at his position and is quickly gaining attention from fans and NFL scouts alike. He is very, very good and B.C. is poised to make some noise in the ACC this fall.

In turn, Flowers has already signed a few NIL deals. His most recent, however, might be his biggest.

Although Flowers did not get $90,000 in cash, he might have gotten something even better. The 21-year-old got himself some new wheels.

Flowers recently signed a deal with McGovern Automotive Group and received a free lease of a fully-loaded BMW X6 M50i.

As part of the agreement, Flowers will drive the vehicle as his own and promote the dealership that hooked him up with the whip.

To imagine a Boston College wide receiver receiving a brand-new, $90,000 (ish) car was almost unthinkable at this time last year. Now players like Flowers can drive in style without having to buy the car himself or breaking NCAA rules.