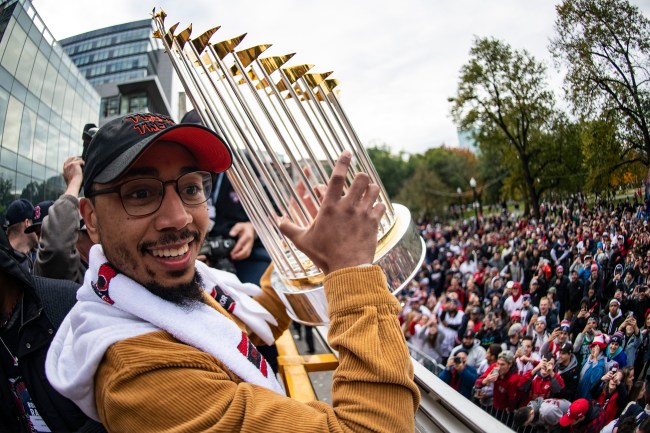 Dilly, dilly, Boston Red Sox fans, because you’ve just accomplished something that we rarely witness — a degenerate championship parade that, according to reports, resulted in an injured fan, an arrested fan and a boo boo for the World Series trophy. Who’s to blame for all this mess? Beer, of course!

OK, so maybe the copious amounts of booze didn’t have everything to do with the wild behavior, but methinks it has plenty of influence in the radical decisions of Red Sox fans today as they watched their baseball heroes roll through the streets of Boston on those famed Duck Boats. I mean, where the hell else can sports fans get away with literally throwing beer cans at professional athletes without much punishment?

With all the beer tossing going on in Beantown today, players weren’t only getting decked by the cans, but, as mentioned, the World Series trophy took a major hit, too. Just look at what happened when once unexpected brewski came hurling through the air, which promptly dented one of the flags on the award.

That’s definitely going to leave a mark. We’re going to need a cleanup on Duck Boat No. 4 after that one.

The World Series trophy wasn’t the only one taking knocks during the Boston Red Sox victory parade, though, because players, and even manager Alex Cora, seemed to be sitting targets for beer cans all day long. Seriously, these guys were getting pelted left and right.

Whoever threw a beer on #MyManager Alex Cora is a POS and ya moms a hoe! #RedSoxParade pic.twitter.com/Mqmp53201R

Dustin Pedroia just caught a beer then threw it down and yelled back that it was warm. Then caught a nip and spiked it, too. COME ON! DON'T GIVE WORLD CHAMPS WARM BEER, PEOPLE! #LaserShow #SoxOn7 #DoDamage pic.twitter.com/iy7CNyXFkN

Over the years, championship parades have turned into a giant brewfest, with guys like Rob Gronkowski in the NFL and Alex Ovechkin in the NHL slamming back beers as if they were at a frat party. And, hey, I’m all for it — but, sheesh, Boston Red Sox fans did it a little bit too hard all day today to celebrate their team’s World Series win.