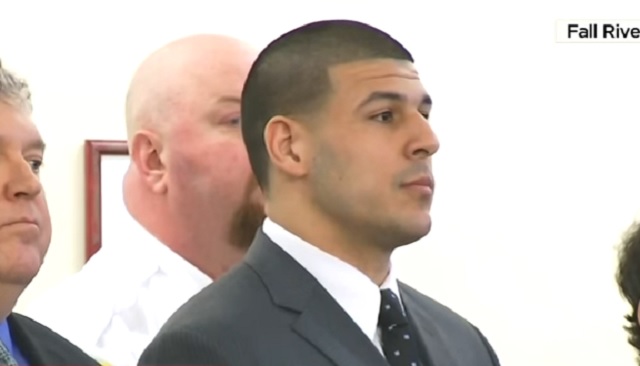 Aaron Hernandez has not been a part of the New England Patriots since getting arrested for murder back in 2013 for the murder of Odin Lloyd. Last year Hernandez committed suicide while serving prison sentence.

“On April 19, 2017 Aaron Hernandez was discovered hanging in his cell by corrections officers at the Souza Baranowski Correctional Center in Shirley Massachusetts at approximately 3:05 a.m., lifesaving techniques were attempted on Mr. Hernandez and he was transported to UMASS Leominster where he was pronounced dead at 4:07 a.m. by a physician at the hospital. Mr. Hernandez was in a single cell in a general population housing. Mr. Hernandez hanged himself utilizing a bed sheet that he attached to his cell window. Mr. Hernandez also attempted to block his door from the inside by jamming the door with various items. The Massachusetts State Police are on scene and the investigation continues. Mr. Hernandez’s next of kin have been notified.”

After today’s win in the AFC championship game one local Boston news station used a photo of Aaron Hernandez while he still with the team in their story about the Pats.

Of course the Internet had jokes about the station’s unfortunate mistake.

Ending was a real killer. Kept hanging in there for a while tho

Is this really the best picture y’all had? Lmao

It’s probably a good idea to double check what photos you use before you hit publish.