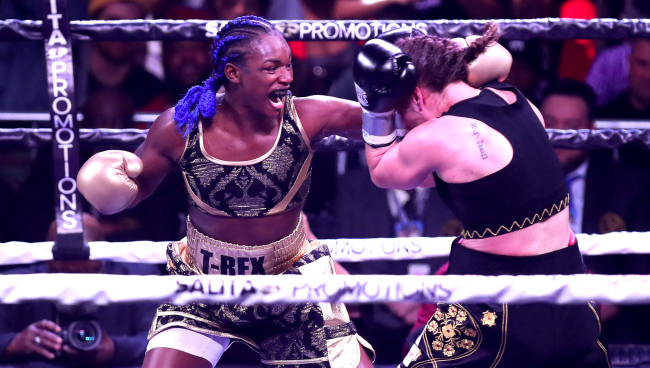 Fresh off her 11th victory in 11 fights, two-time Olympic gold medal-winning and world champion boxer Claressa Shields has announced she will be making her MMA debut for the Professional Fighters League (PFL) on June 10, 2021.

Shields will be facing off against Brittney Elkin as part of an upcoming PFL promotion at the Ocean Casino Resort in Atlantic City and her MMA debut will be televised on June 10 at 5:30 p.m. ET on ESPN+.

The 26-year-old boxing champion said in a statement, “I am very excited to cement my legacy as the ‘Greatest Woman of All Time.’ I cannot wait to step into the PFL cage for the first time on June 10 and show the world that I never back down from a challenge. I have shown I am the best boxer in the world, and eventually I intend to do the same thing as a mixed martial artist.”

This is my main focus! June 10th it’s time to step in the cage and put my hardwork to the test! https://t.co/jXHrVKMBKs

Elkin, who has fought for Bellator and the PFL during her pro MMA career, and was coincidentally the debut MMA opponent for two-time Olympic gold medalist Kayla Harrison in 2018, carries a record of 3-6 into her fight with Shields.

“I’m very grateful to be back in the PFL and to have this opportunity to square off with Claressa Shields. I know she is a great boxer, but this is MMA,” said Elkin about the matchup. “I plan to show everyone that I am a well-rounded fighter who can compete wherever the fight takes me.”

MMA Debut is set! I’ve fought for the legacy in boxing 🥊 long enough! I’m ready to make some real money while I go for more legacy. Boxing holla at me when the money is right 😇 https://t.co/WAs83Z3sFi

Shields, who has been boxing since she was 11 and is the only boxer in history, female or male, to hold all four major world titles in boxing, also appeared on Good Morning America on Tuesday to discuss her PFL MMA debut with Michael Strahan.

“Going through the pandemic, it was a depressing time,” Shields told Strahan. “I wasn’t in the ring. I had gained a whole bunch of weight and I’m like, ‘I’ve accomplished everything in boxing.'”