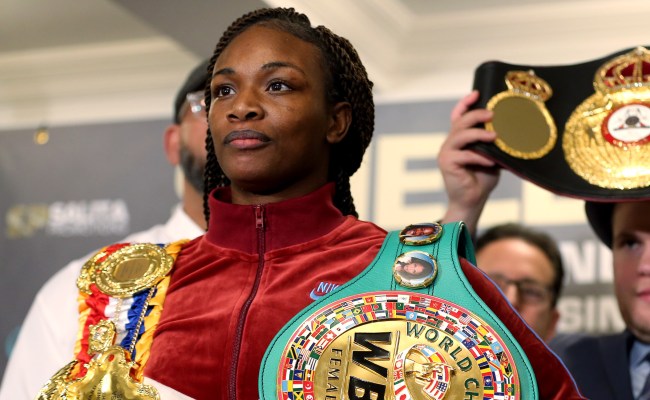 In case you missed it, following his resounding defeat of a former NBA player, YouTube star Jake Paul has reportedly agreed to an exhibition bout with undefeated boxing legend Floyd Mayweather.

Paul, 2-0 in his professional boxing career with wins over YouTuber AnEsonGib and former NBA player Nate Robinson, will reportedly take on Mayweather on Feb. 20, 2021.

Once Paul is down with that fight, there’s another multi-time world champion and gold medal winning boxer who would like a shot at him: Claressa Shields.

Shields, who recently announced that in addition to continuing her boxing careeer she will be making the move to MMA, spoke to TMZ Sports about Paul and the bad intentions she has in store for him should he ever step into the ring with her.

“Jake Paul is making his money, he’s doing his thing, but stay away from us real fighters,” said the two-time Olympic gold medalist and holder of all four major world titles in boxing. “And anybody out there that say, ‘Oh, Jake Paul will destroy her because she’s a woman’ … I’m the greatest woman! So, no, Jake Paul won’t do nothing with me, and if he think he can, he can come see me.”

“I’ve been boxing for 14 years, two Olympics, but they would still give Jake Paul the nod because he’s a man. And it’s like, ‘You guys don’t know nothing,'” Shields said.

“I, Claressa Shields, will whoop Jake Paul’s ass! He can come in the ring weighing 180 pounds and I will come weighing 168 and I will beat the s–t out of him,” Shields added.

While it’s extremely unlikely that any sanctioning body in America would currently agree to a Shields vs. Paul boxing match, I’m sure, in this day and age of YouTube and other streaming services there is surely some way they could still get it done, and make tons of money – one of the things that Shields says forced her move to MMA.

Hey, if Jake Paul, with two whole professional fights against opponents who had a combined 0-0 record in the ring before fighting him, is going to be allowed to fight 50-0 Floyd Mayweather in an “exhibition,” why shouldn’t Shields be allowed to go toe to toe with Paul in one as well?