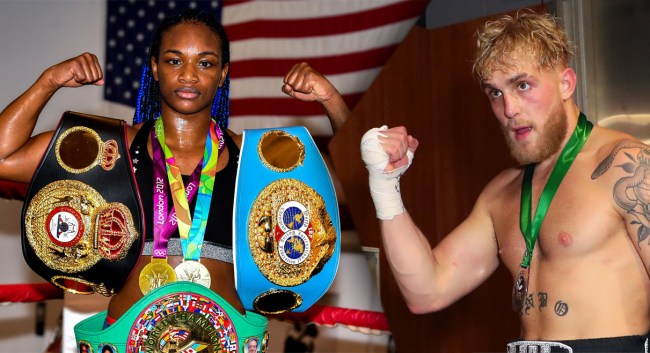 YouTuber Jake Paul is really feeling himself these days after moving to 2-0 in his professional boxing career, with wins over two opponents with zero professional fights under their belts between them before he faced them.

Supposedly, after wins over YouTuber AnEsonGib and former NBA player Nate Robinson, Paul will next be taking on Floyd Mayweather in an exhibition bout on Feb. 20, 2021.

In fact, the 23-year-old is feeling so full of himself that Tuesday night he decided to take to Twitter and call out a number of famous people, telling them he wanted to fight them.

Let’s see who the real king of Ohio is? @KingJames

Don’t get me started about @Claressashields

I’m sick of y’all thinking you can fight me?? Only real call out so far has been @TheEllenShow

Boutta knock your little wig the fuck off @realDonaldTrump little bitch… let’s do the PPV?! Wtf u at?

As one woud expect, none of those celebrities and sports figures responded to Paul’s antics… except one – the only real boxer on that list: Claressa Shields.

Shields, who recently announced that in addition to continuing her boxing careeer she will be making the move to MMA, had recently discussed what Jake Paul is doing in boxing.

(Yes, that is MMA GOAT Johnny “Bones” Jones she is training with there.)

“Jake Paul is making his money, he’s doing his thing, but stay away from us real fighters,” the current holder of all four major world titles in boxing said in a recent interview with TMZ Sports.

Oh yeah, she also added that she would “beat the s–t out of him” if they ever stepped into the ring together.

So, when she saw Paul’s tweet Tuesday night, she had a good laugh and shot back, calling Paul a “fake Eminem.”

She’s right. Jake Paul does not want any of that smoke. Though we would certainly love to see it happen.