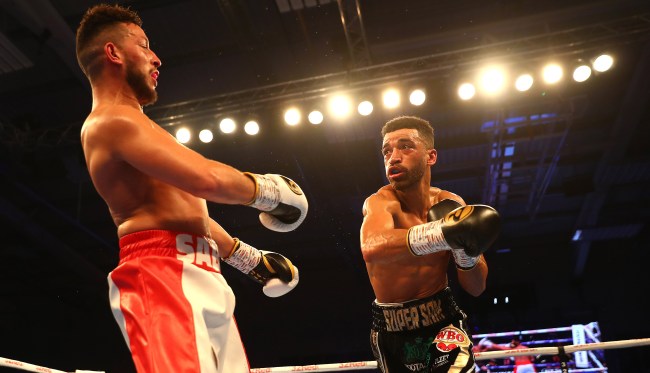 Undefeated French boxer Sabri Sediri was 15 seconds from winning another fight, but ended up getting knocked out after taunting his opponent Sam Maxwell. Karma, she is a bitch.

However, it was Sediri who had the upper hand as the fight went into the 10th and final round, having scored a couple of knockdowns earlier in the fight. So he began doing a little showboating, dancing and taunting the seemingly exhausted Maxwell.

Sam Maxwell was losing and being taunted by his opponent all fight and then did this with 10 second to go!

“I knew the right hand was waking,” Maxwell told BT Sport Boxing. “We just knew it in our corner. I just let it go, I just believed in it.

“I think he switched off a little bit and I just took my chance. The start of the fight threw me completely off. I felt I was edging back into it [fight] and I was waiting for one last big round, which I got.”

Maxwell also posted my new favorite hashtag on Twitter after the fight: “#chatshitgetsammed.”

The drama 😳
The karma 👀
The knockout 👊

Here's the incredible 10th and final round of Sam Maxwell v Sabri Sediri in full 🙌 pic.twitter.com/dJ88afMRBQ

God love all the British slang this knockout spawned.

Have that, you gobshite

Damn... anyone who taunts like that should get the work 🥊 well done

Love those K.o’s. When the cocky lad gets sparked 🥊

Delighted for the Maxwell lad. There’s a moral there for cocky gits the world over 🥊💪

😂😂😂what a cracking punch, deserved that.

I have no idea what any of them are saying, but I am going to start using all of these words and phrases in conversations now.