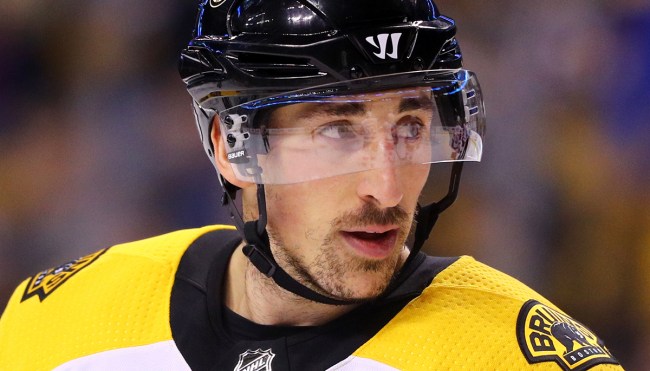 Brad Marchand is one of the most polarizing figures currently playing in the NHL. The notorious pest is despised by plenty of fans thanks to a history that’s earned him a reputation as a dirty player but is inarguably one of the league’s most talented skaters and a guy most people would love to have on their team if given the chance.

Part of the reason Marchand is so effective stems from his ability to get under (and lick) the skin of his opponents (one of my favorite stats ever is that he was voted the NHL’s best and worst trash-talker in a player poll that was conducted in 2019). His chirping abilities make him a prime candidate to be mic’d up during a game, and that’s exactly what TNT decided to do when the Bruins faced off against the Canadiens in Boston on Wednesday night.

Prior to the contest, the broadcast crew conducted a pretty unconventional interview by chatting with Marchand while he skated around during pregame warmups. During the conversation, they asked him if he and other players have been forced to tone down what they say because they know their exchanges are being recorded for posterity.

This led to an all-time mic’d up moment, as Marchy admitted “You’ve got to be careful” and added “There’s some things you say sometimes where you’re like, ‘S—it, I hope they didn’t…” before immediately realizing what he’d done.

Marchand dropping an s-bomb while talking about how there are things you can’t say while miked up is a truly amazing hockey moment pic.twitter.com/1qk3I0214p

When you consider Marchand scored two goals in the span of 15 seconds in the first period before capping off the hat trick halfway through the second, he might want to try dropping obscenities on live television before games more often.