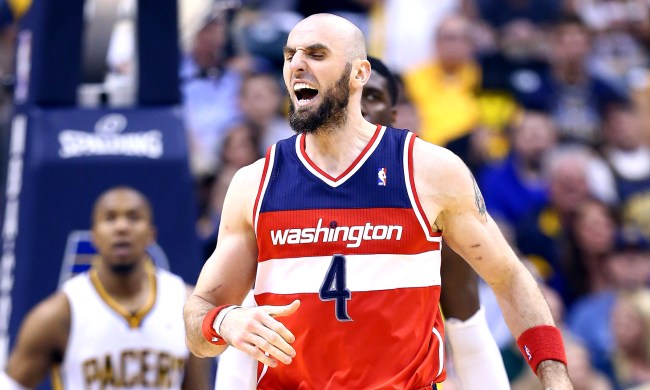 When it was announced that Russell Westbrook was traded to the Washington Wizards for John Wall and a first round draft pick, most people assumed that he would want to continue to wear the number 0 as he had done throughout his NBA career this far.

In fact, people were so sure that Westbrook would want to wear number 0 that longtime Wizards star Agent Zero, Gilbert Arenas, gave his implicit approval to Westbrook even though the number hadn’t been worn by a member of the Wizards since he was traded to the Orlando Magic in 2010.

Despite that blessing, Westbrook announced that he would change numbers and will be donning the number 4 for his new start in Washington. Westbrook wore the number 4 when he played basketball in high school.

For those wondering about Russell Westbrook wearing No. 4 with the Wizards, it was his jersey number in high school. He switched to No. 0 when he got to UCLA because his preferred No. 4 belonged to Arron Afflalo:https://t.co/0fglyBJDKD pic.twitter.com/pqMGMQvISU

Thankfully for Russ, Gortat has given him his blessing to use his number.

Hey @WashWizards #russ got my blessings to wear #4 😂😎. Good luck to him and to entire team next year !

Making Gortat’s statement even more funny is the fact that he only wore number 4 for his first two seasons with the Wizards. He actually wore number 13 the rest of his time in D.C.

Too funny. And here we all thought Gil was the one with “No Chill.”

Did he get Gazes https://t.co/HRt9RSPiC2