Brady Quinn Goes Off On Zach Wilson And The Jets Media: ‘Never Seen A QB Get More Love For Doing Less’ 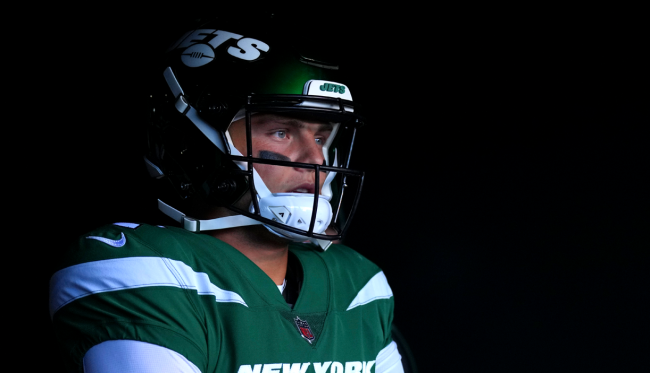 The 23-year-old signal caller out of BYU, taken second overall by the Jets in the 2021 NFL Draft, went 3-10 as a starter his rookie season. He threw for just nine touchdowns with 11 interceptions and was the league leader with 370 yards lost on sacks.

Not that there is anything unusual about a rookie quarterback struggling. Nor is it odd for the New York Jets to lose 10 out of 13 games.

Brady Quinn certainly can understand that, considering he too was a first round pick who went 4-16 in his brief NFL career with the Cleveland Browns and Kansas City Chiefs.

However, during an episode of Fox Sports Radio’s Two Pros and a Cup of Joe this week, Quinn wonders why the New York media has been so nice to Zach Wilson.

Quinn told LaVar Arrington and Jonas Knox, “God, he looked awful [in the preseason game versus Philadelphia]. Can we just acknowledge this? Can we acknowledge once again the media just continually tries to make it something? They want so badly for this thing to work out, and it’s kind of tough, honestly, to listen to. I’ve not seen a quarterback get more love for doing less from the media than Zach Wilson in a long time. And it’s really weird.

“I don’t know if it’s the desperation of the Jets media and fans wanting it to work, but even, once he got selected in the draft, he’s smaller so he’s subject to injury, has has been. I understand his last season people really made a lot of the throws and things he did. It was a Group of Five schedule. He was playing with a much better team. And all those things, all those concerns, they all played themselves out.

“I hope he recovers from [his knee injury],” Quinn continued. “I don’t know how bad it’s going to be. Reports said two to four weeks. … I don’t get the media. Are we all watching the same thing?”

Jets fans didn’t exactly agree with Brady Quinn’s statements. Or did they? Hard to tell for sure.

I mean, no one is a better example of a quarterback being overly hyped than Brady Quinn.

If anyone can recognize failure it’s Brady Quinn.

Other Jets fans will never admit it and I hate to admit it myself but Brady Quinn is not wrong about Zach Wilson here https://t.co/i5WYku1oAQ