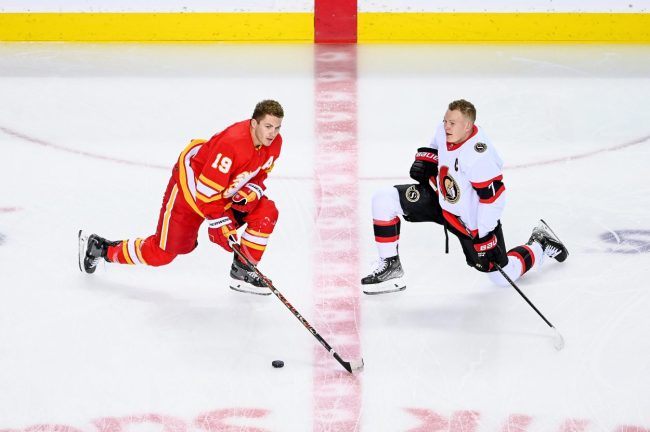 There is nothing in life quite like a good old sibling rivalry. The only way that a battle amongst brothers can get better is if it unfolds during a professional sporting event.

Well, that’s exactly what happened on Thursday and it was the funniest hockey highlight of the year thus far.

The Calgary Flames hosted the Ottawa Senators, which set up a matchup between Brady and Matthew Tkachuck. Sons of 18-year NHL veteran Keith Tkachuck, the two are two years apart in age, with Matthew being the eldest.

During what ended up being a 4-1 blowout in favor of the Senators, it was Brady who got the last laugh on more than one occasion.

During the third period, the Tkachuck brothers both got tangled up near the crease. Matthew decided to give his littler brother a shove and sent him down onto the ice.

After getting dumped by big bro, little bro got his revenge from the ground. He stuck out his stick, gave a swift upward motion, and caught his brother directly where the sun doesn’t shine.

In turn, after catching Brady’s stick to the groin, Matthew crumbled up in discomfort.

This certainly isn’t the first time that these two have been up to some shenanigans. As brothers who are close in age, growing up in a hockey household, you just know that Brady and Matthew got into it. It’s just way funnier when it happens on the ice.