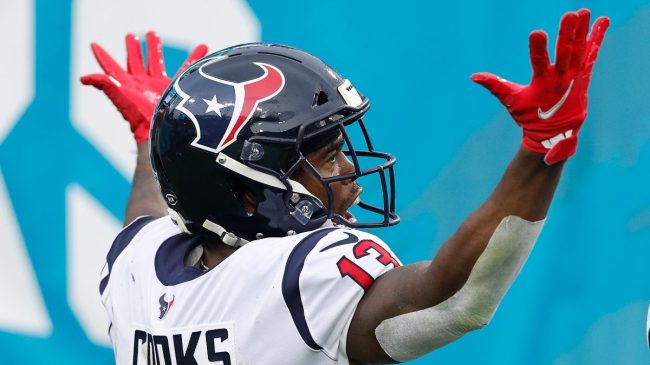 The NFL trade deadline has come and gone and it was a busy day for the league. However, many expected the Houston Texans to make a move, especially considering there seemed to be plenty of interest in star receiver Brandin Cooks. Instead, a deal never came to fruition and Cooks is reportedly upset about it.

According to John McClain, “Brandin Cooks is ‘pissed off’ about not being traded.” You’d think Houston would have made a deal happen considering they have nearly no chance of making the playoffs. They could use the future assets to continue building a roster that desperately needs young talent.

Brandin Cooks is PO’d about not being traded. Who can blame him? Can’t wait for his next session with the media after the Eagles game.

It’s unclear why the Texans didn’t trade the veteran wide receiver. However, it’s not like they weren’t trying. Apparently, “there were talks. But nothing came of it,” per Ian Rapoport.

No trade for #Texans WR Brandin Cooks, source said. There were talks. But nothing came of it.

Cooks took to social media shortly after the NFL trade deadline had passed. Based on his comments, it’s easy to tell the star wide receiver is unhappy with his current situation.

Don’t take a man’s kindness for granted. Covered for the lies for too long those days are done. Crossed the line with playing with my career 🏹

It’s unclear what Brandin Cooks means when he states, “Covered for the lies for too long those days are done.” Many speculate it could be about the Deshaun Watson saga that took place in Houston. Either way, Cooks is ready to move on from Houston, but the Texans were unable to trade him anyway.

Keep an eye on this situation though. There might be some fireworks in the days to come as Cooks seems legitimately upset about how it all transpired.