WATCH: Top Football Recruit Trolls Alabama During Commitment, Which Is A Bad Idea 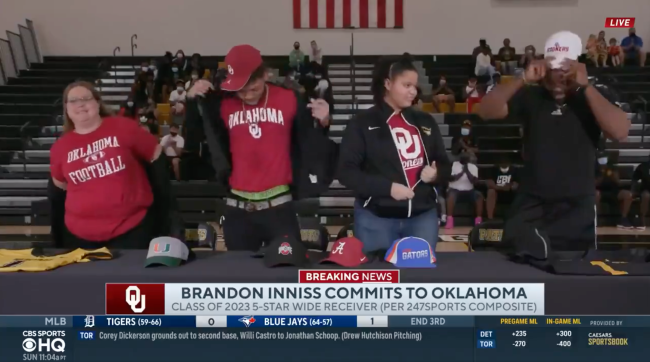 The University of Alabama is very good at football and it’s best not to anger them like five-star recruit Brandon Innis did over the weekend.

Since Nick Saban’s first year as head coach in 2007, the Crimson Tide has not lost more than three games in a single season and that only happened once. In that same timeline, Alabama has won six national titles and has been in the championship game eight times, including five of six College Football Playoff finals.

This all goes to say that if a school puts the team from Tuscaloosa on the schedule, it is more than likely going to lose. Thus, it is best simply to respect the Tide.

Do not crack jokes, do not troll, do not predict against them.

That notion is especially true for Oklahoma, which has reached the CFP four times and lost in the semifinals all four times. The Sooners even lost to the Tide in the 2018 semifinal.

Somebody needs to let Innis know. The nation’s No. 1 wide receiver in the class of 2023 held a commitment ceremony on Sunday and brought the disrespect.

He sat with five hats in front of him— Miami, Oklahoma, Ohio State, Alabama and Florida. Innis pump-faked like he was going to pick up the Crimson Tide hat and then put the Sooners hat atop his head.

Trolling opponents during a college commitment is always funny, and this is no exception. However, choosing to pump-fake Alabama was ill-advised.

Respect the Tide and their greatness or Saban will eat you for breakfast.