Ex-49er Brandon Jacobs WENT OFF On Jim Harbaugh, Vowing To Expose Him And Get Him Fired 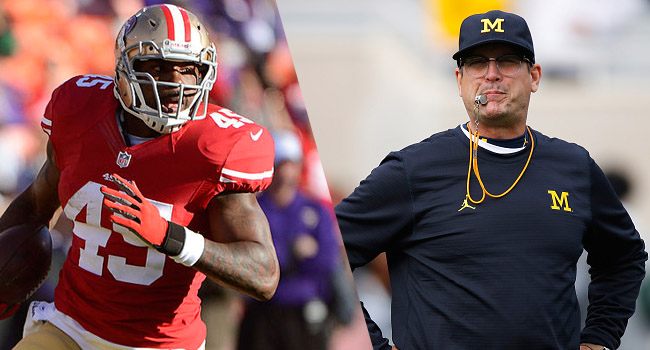 For some reason, ex-49er running back Brandon Jacobs has a major beef with his former coach and current Michigan head man Jim Harbaugh. Perhaps rushing only 5 times for 7 yards and being suspended for the season’s final three games under Harbaugh has something to do with it

During an appearance on the “Tiki and Tierney Show” Jacobs went off on his former coach describing him as actually knowing very little about football.

“I enjoyed my time [with the San Francisco 49ers], but we didn’t see eye to eye,” Jacobs told the hosts. “I knew more about football than they led on. Going somewhere where they didn’t have route conversions into certain coverages was just absurd. They were just running routes in the defense, getting people killed. Size and strength is what they had, and that’s why they won. Let’s be real.

“They had great assistant coaches, but Jim didn’t know what he was doing. Jim had no idea. Jim was throwing slants into cover-2 safeties, getting people hurt. That guy knew nothing, man.”

Harbaugh, who is never shy when it comes to responding to his critics, chose a more relaxed approach this time, using the Bible in his response…

Biblical advice for @gatorboyrb Let all bitterness & wrath & anger & clamor & slander be put away from you, along with all malice.

How very philosophical of him, huh?

Yeah, well, Jacobs wasn’t feeling very Biblical and decided to double down on his criticism of Harbaugh…

@CoachJim4UM Don't ask any of your assistant coaches either.

Jacobs also tweeted, “Love the support but stop the super bowl talk. I will expose him, Michigan will fire him when I am done.” However, that one was later deleted.

Hard to believe this is the last we will be hearing of this unexpected feud considering the two men involved.