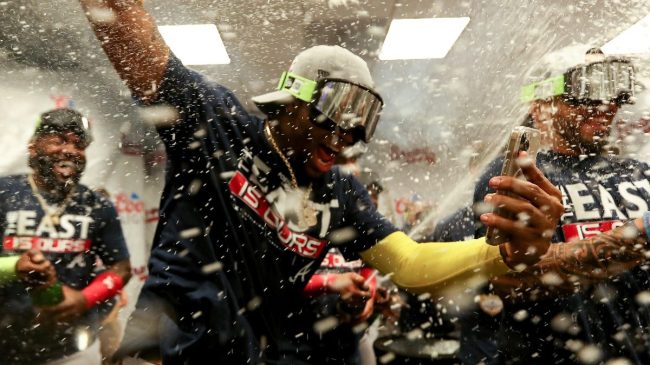 The Atlanta Braves have been on a roll lately, as they prepare for the upcoming MLB playoffs. They have an incredibly young roster and the franchise is potentially set up to be competitive for years to come. However, while the team was being praised, someone hilariously roasted the Falcons and Hawks out of nowhere.

Falcons And Hawks Get Roasted For No Reason During Braves Praise

Aaron Ladd shares the video from MLB Network. The Braves were in the middle of being given the ultimate praise, then someone out of left field roasts the Falcons and Hawks to oblivion.

Was that really necessary? Especially considering the Falcons have been down bad since giving up a 28-3 lead in the Super Bowl. Meanwhile, the Hawks haven’t had much success through the years either. Meanwhile, the Braves have been absolutely fantastic and look like a true powerhouse.

Regardless, the Atlanta teams may be on the rise here soon. The Falcons are playing a bit better than expected as Arthur Smith establishes himself as a head coach. Additionally, the Hawks made a big trade in acquiring Dejounte Murray to pair up with Trae Young.

Regardless, it’s still pretty funny to hear both of those franchises be criticized out of the blue like that. Luckily the city of Atlanta has the Braves to cheer for, as they’re one of the best teams in the league.

Look for Atlanta to make some noise in the MLB playoffs. They aim to get another World Series win after winning the championship in 2021.