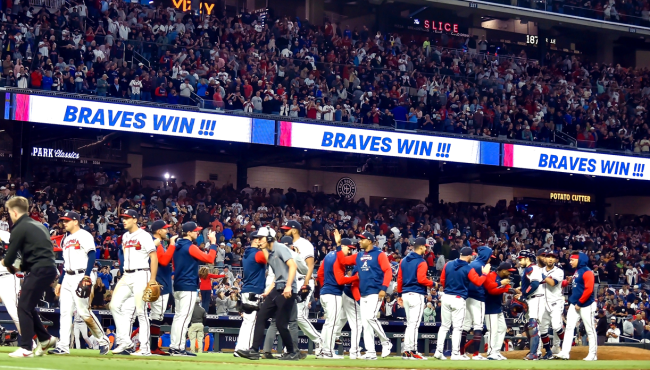 If there is one thing that sports fans love more than just about anything it is reminding fans of their team’s rival about their hot takes that ended up turning ice cold.

Nowhere is that more evident these days than in the National League East.

Not only are Philadelphia Phillies fans having a ball roasting baseball writer Ken Rosenthal for his ice cold take about team’s playoff chances, Braves fans are having fun at the expense of SNY Baseball Night in New York host Sal Licata.

Back in May, Licata pronounced the National League East race over after the Mets beat the Washington Nationals 10-0 to take a 10.5 game lead in the division.

“You don’t need me to tell you this but I’m gonna tell you anyway, the NL East is over,” said Licata. “That’s right. It’s a wrap. No one is touching the Mets. Tweet me the hate all you want about the jinx. Nonsense. The Mets will be National League Eastern Division champs and I don’t even think the Braves are gonna challenge them.”

He also added, “And even if the Braves do turn it around, it will be too late. The NL East is over.”

"THE NL EAST IS OVER" – @sal_licata on Baseball Night in New York pic.twitter.com/caPEQM4w6w

Anticipating Sal Licata having to eat his words, fan after fan after fan tagged the Twitter account @RemindMe_OfThis. (Seriously, there are dozens of these tweets.)

Fast forward to October and the Atlanta Braves, who swept the Mets over the weekend, now sit atop the NL East needing just one more win or a Mets loss to clinch the division.

Who else is here on October 2nd?? Man Sally boy you sure missed on this one didn't you?

Did I mention that Braves fans are having way too much fun with Sal Licata’s Mets take?

In a wild coincidence, both Rosenthal and Licata both made their now freezing cold takes on the same day, May 31, 2022.