Fans React To The Braves Selling A $25,000 Burger That Comes With A Real World Series Ring 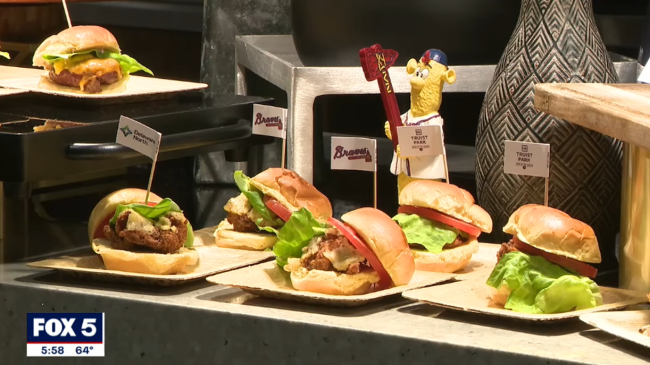 Every year some baseball team comes out with a completely outrageous food item for their concession stands at the ballpark.

Who among us will ever forget the year the Cleveland Indians Guardians unveiled a “slider hotdog” featuring mac-n-cheese, bacon, and Froot Loops?

Okay, so yeah, that probably wasn’t the best food idea ever, but hey, you miss 100 percent of the shots you don’t take, right?

This year, the Atlanta Braves (they’re still called the Braves, right?) announced that they will be selling a new burger at Truist Park.

The price for all of that is going to be $151 which represents the 151 years that have passed since the founding of the franchise.

“It’s a very expensive burger, but you can bet it needs to be shared with a lot of different people,” Atlanta Braves president and CEO Derek Schiller told Fox 5 Atlanta. “It includes some gold foil, edible gold foil on it, some Waygu meat and all kinds of different things.”

Now, if that price tag is still too low for you, the Braves are also offering the same World Champions Burger with a limited edition World Series ring for $25,000 on the side… while supplies last, of course.

And they couldn't pay Freeman?

But how much would it be without the tiny flags stuck in the bun?

Fine sell some $25k limited edition rings, but with a burger lol. Such a weird idea - no one going to the game goes to the concession and says “hmm, for an additional $24.98k I can get a ring - sold!” Likewise, no one buying a ring cares about a $20 burger.

Until this tweet I had no recollection Atlanta won the world series last year.

That is the real travesty here.