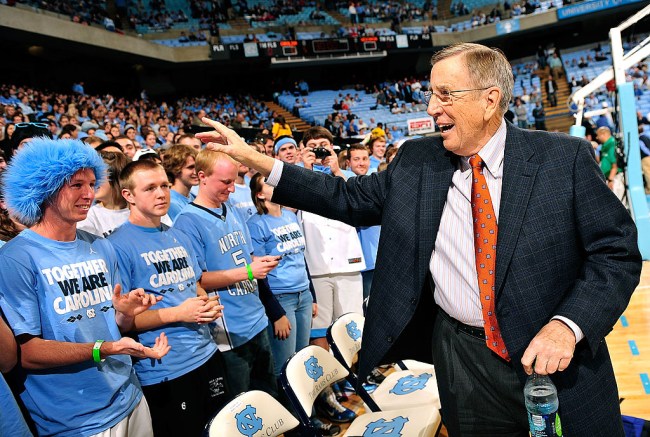 Millions upon millions of College Sports fan grew up with Brent Musburger calling NCAA Football and Basketball games. He was CBS Sports’ voice of college football back in the 1980’s, and he’s been calling games in primetime for ABC/ESPN for what seems like my entire adult life.

His time on the air has come to an end, though. Brent Musburger is retiring from sports broadcasting at the age of 77. He will call his final game next Tuesday when the Kentucky Wildcats take on the Georgia Bulldogs, and this will truly mark the end of an era.

Brent Musburger has one of those voices where you don’t even need to see his face on the television to know who is speaking, it’s that recognizable and iconic. He’s been a primetime staple during the biggest college football games of the past 30+ years, but that’s all over now as he embarks on a new career in sports handicapping.

Here’s Brent discovering Jenn Sterger in the crowd during an FSU game, a moment which would forever change Jenn’s life:

According to an AP report, Brent Musburger will begin retirement by moving to Las Vegas where he’ll help his family launch a sports handicapping business. He brings decades of invaluable experience with him, and a unique perspective on sports. I can’t speak to his prowess as a sports handicapper, but I find it interesting that a man this close to NCAA sports is retiring from the limelight to go full-time in the gambling industry.

The AP report about Brent Musburger’s retirement also makes sure to mention that both ESPN and Musburger himself claim that his retirement from broadcasting has nothing to do whatsoever with his controversial comments during the Sugar Bowl.

Be sure to set your DVRs for that Kentucky-Georgia Men’s Basketball game next Tuesday if you want to catch Brent’s last time ever calling a game.