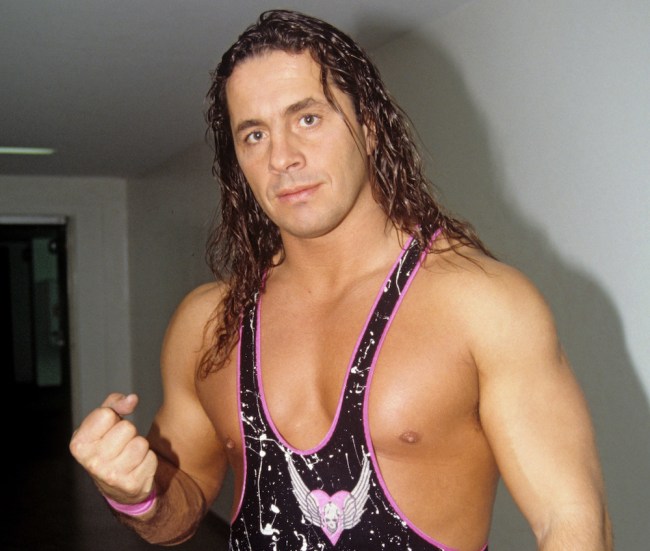 Celebrities deal with stalkers more than fans probably realize and even people with just a small level of fame have incidents with overzealous fans.

At the height of his popularity, Bret Hart was one of the most recognizable faces in professional wrestling. Not to mention one of the highest paid grapplers of his day.

During his WWE run, Hart was the face of the company. When he made the jump over to the rival federation in 1997, Hart took a legion of fans and possibly more than a few female stalkers.

In the latest episode of his podcast Confessions of the Hitman, the 63-year-old wrestling legend revealed that he’s had several stalkers during his career, including a few really uncomfortable situations during his tenure with WCW.

“Throughout my [professional wrestling] career, I had at least three, maybe four, very dangerous and serious stalkers,” Hart explained on the most recent episode. “Females, all females, always situations where I made the mistake of being too nice, signing pictures. Being too nice brought out some kind of attachment that they couldn’t let go of.”

Hart told two incredibly disturbing stories about two different female fans. The first was about “the Nasty Girl” and her creepy voicemails.

“There was one girl near the end of my [professional wrestling] career when I had the concussion injury, she was totally nuts and psychotic. And she made me death threats for quite a few weeks, and [was] telling me she’s going to kill me and stuff.

And I didn’t know who she was or what she looked like. I just kept getting these voicemails on my machine. In her mind, I guess she thought I was seeing her or I promised I’d see her after my match. I never talked to her or that kind of thing.

She had all these delusional thoughts about me and her. And, of course, I would stand her up. I guess because I wouldn’t show up at these things.

It was probably Owen [Hart] calling her or something!

I found that she was becoming more of a problem when I got concussed. I got hurt, and I remember getting to my [hotel] room. I had a voicemail from her.

She called herself ‘The Nasty Girl’. That was sort of her name or her handle. And she was totally crazy.”

The second story wasn’t Hart’s brother pulling a rib and could have had a much worse ending without the help of a rental car agent and the local law enforcement.

“It was pretty serious stuff and I remember WCW did nothing, like zero. And I remember, I said to the girl at the counter, I said, ‘have you ever seen a real stalker?’ She goes, ‘no, I haven’t.’ I said, ‘there’s one right across the street right now looking at me’, and she looked back and she saw her peek out from behind the pillar. And she goes, ‘you’re not kidding, are you?’ I said, ‘I’m not kidding.’

So she goes, ‘do you want me to call the police?’ And I said, ‘please call the police. Please.’ This is not kidding around stuff. This is really serious.

So she called the police and three policemen came up to me. They were [all] fans or friendly to me. They said, ‘what’s going on?’ I said, ‘there’s a girl’. And I remember she did the same thing, peeked from behind the pillar, and they saw her and they go, ‘okay, we see her.’ And I said, ‘she’s a nut. She’s following me around and she [has] made a lot of threats to me.’ I told them what happened.

They said, ‘we’ll go and talk to her’ because I wasn’t 100% sure it was the right girl. Two cops walked me to my car and one cop said he’s going to go over and check her out and investigate, get her ID, and get her story. And so I left.

They walked me to my car, I drove to my hotel. Maybe about 10 minutes after I got to my room, they called me from the lobby and told me that the girl tried to attack the policeman [with a knife] who walked over, and they wanted me to come and fill out a statement in support of the policeman.

I would never have to come back to court, which I didn’t have to. This would all be backup support evidence for the [officer]. So, they arrested her and took her to jail.”

Thankfully, “The Hitman” wasn’t harmed in any of these tense altercations. With much easier access to wrestlers and their whereabouts, thanks in part to social media, it’s a wonder that moments like the rental car incident don’t happen more often.

Hart’s stalkers have hopefully calmed down in recent years but he’s still been unable to avoid crazy people including being attacked onstage during his own Hall of Fame induction.