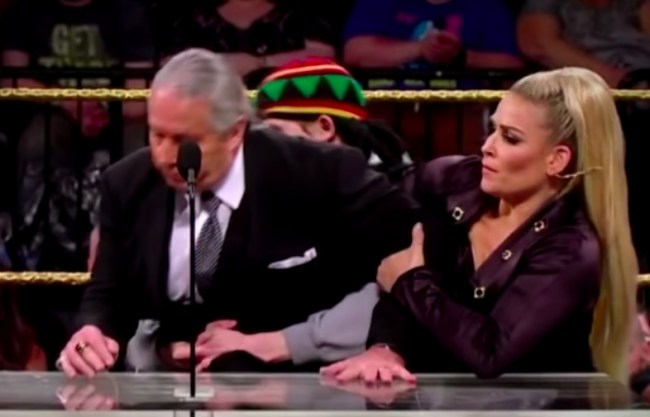 How much of a deranged lunatic do you have to be to tackle a 61-year-old stranger for no reason whatsoever while he’s giving a speech in front of thousands of people?

The only one who knows the answer to that question is 26-year-old Zachary Madsen.

During Saturday night’s WWE Hall of Fame ceremony in Brooklyn, New York, Madsen, donning a Rastafarian-style hat, jumped into the ring while Bret ‘The Hitman’ Hart was delivering a speech and tackled him to the canvas before getting roughed up by a team of security guards. NYPD said that  Madsen punched 61-year old Hart before being subdued. One of the people who flew into the ring to protect the Canadian wrestling legend was Travis Browne, Ronda Rousey’s husband and former UFC heavyweight fighter. Browne appears to deliver a few hard punches to the crazed asshole.

Here's the full exchange of the fan attacking Bret Hart.

Madsen, an amateur mixed martial artist from Lincoln, Nebraska, appeared in court yesterday and during his arraignment prosecutors revealed that Madsen told police, “I just felt like it was the right moment.”

Somebody tackled Bret Hart during his Hall of Fame speech. wtf? pic.twitter.com/Ui1CYciUhx

According to Daily Mail, a judge issued Bret Hart and WWE security guard Thaddeus Jones orders of protection against Madsen and held him on $1,500 bond for charges of assault and criminal trespassing.

It seems as if the court-ordered protection is a necessary mechanism, given Madsen’s dicey past. The dude was reportedly held in September for allegedly stalking mixed-martial artist Haris Talundzic. And according to 1011now, he is currently out on bond in several cases where Talundic was the victim, including two from 2018 and one from 2019.

According to the criminal complaint, the victim contacted Lincoln Police about several incidents involving Madsen. The victim began to train elsewhere, but then Madsen started posting threatening messages on social media. The complaint goes on to say the victim was granted a protection order, which Madsen violated.

This dude needs to be evaluated mentally before shit escalates to someone getting hurt.