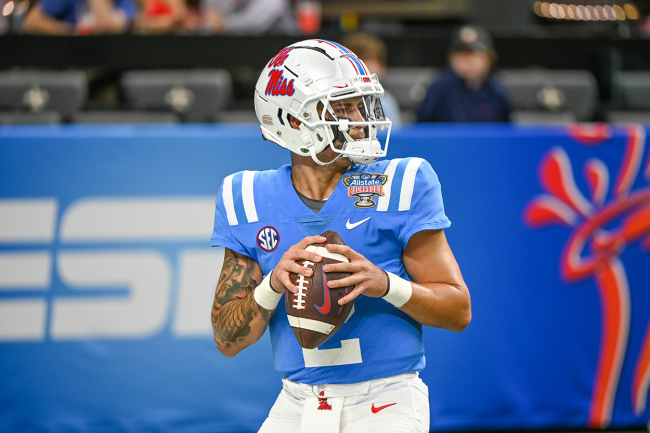 Bret Michaels and quarterback Matt Corral’s family go way back after Corral once dated the Poison frontman’s daughter Raine. The two have been linked to one another for the past eight years, since Corral was a freshman in high school.

Late last year, Michaels loaned the Corral family his private jet so that his parents could be in attendance at his Senior Day. Since then, the bandana-clad rockstar has been extremely vocal about why he thinks the Ole Miss signal-caller should be one of the first quarterbacks off of the board in this month’s NFL Draft.

I also suggest to keep an eye on a kid that is an insane quarterback in future drafts named Matt Corral from Ole Miss.🤘🏻🏈 #NFLDraft

In particular, Michaels wants Corral to end up in Pittsburgh. The Steelers are actively seeking help at the position this month and haven’t really been linked to Corral.

Michaels wants that to change. He recently spoke with The Rich Eisen Show about his family friend and gave his pitch for why he is the real deal.

“What about my buddy, family friend, of ‘our’ family. Matt Corral, Ole Miss. I’m telling you. I know (10) is in I get it… Matt Corral, I’ve seen him grow up and play all over SoCal. Whatever my 2sense is worth, he’s got the heart of a Lion.” – Bret Michaels pic.twitter.com/ptHuvEJJCU

Michaels is amongst the notable Steelers fans. He is from Pennsylvania and once lived next to someone important within the organization. As a result, it is his hope that Corral will end up going No. 20 overall to Pittsburgh.

Also on The Rich Eisen Show, Corral spoke about his ties to Michaels and what the rocker has been saying throughout the process.

“I’ve talked to Bret throughout this process. He really wants me to land in Pittsburgh,” said Corral. “Bret’s really pushing (Steelers owner/team president) Mr. Rooney for them to pick me.”

Here are Corral’s full comments about his connection to Michaels: