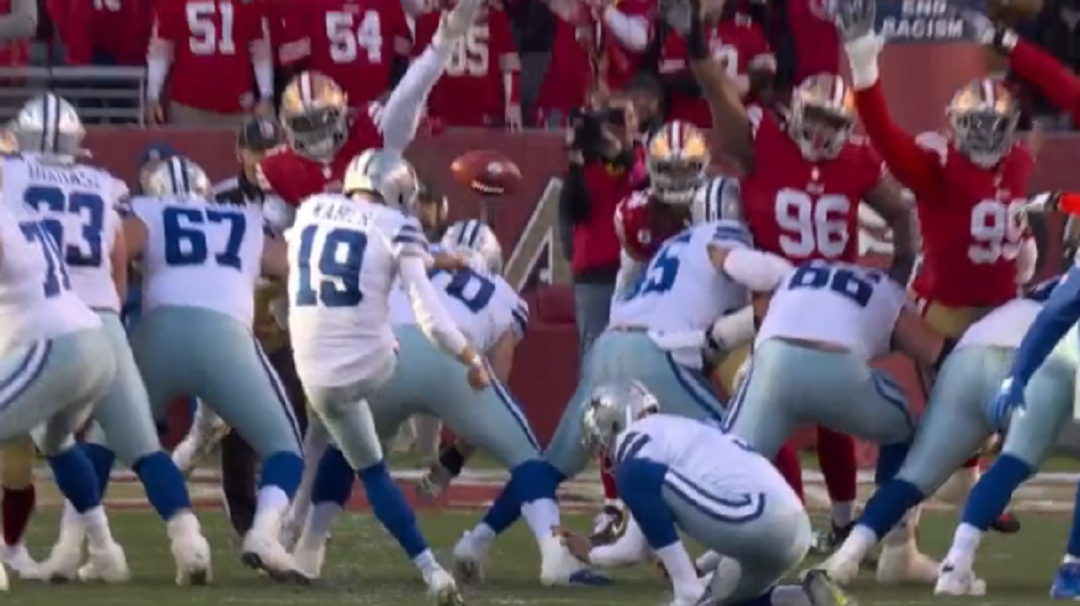 Brett Maher has the yips, and Cowboys fans hope it doesn’t cost them a playoff game.

FOUR in a row(tonight), FIVE in a row. Dude, come on. Brady is on the other side. Maher will be eating 🍿 next week in SF. #DallasCowboys pic.twitter.com/OfSd5R4oHU

Before Sunday’s divisional playoff game, Maher was shaky and missed several practice kick,s which led Cowboys owner Jerry Jones to give him a pep talk.

Brett Maher just missed a 43-yarder about 20 feet wide right after 2 earlier misses right from shorter distance. Then made two. Then missed another wide right.

Made his next 3. Power of Jerry. https://t.co/FFeo5MBkgD

In his first kick of the game, Maher got blocked by the Niners defense,e but his kick looked like it was definitely going wide left.

That Extra point was going wide left. No way that lineman should have blocked it if he kicked it straight. This could be an issue in the 2nd half. I feel awful for Maher but he has a job to do and he needs to do it.

Earlier this week, the Cowboys signed a backup kicker, and they might need to use him if Maher keeps having issues.

The Cowboys have signed kicker Tristan Vizcaino to the practice squad, adding a possible insurance policy in case the team wants to bring him to the game alongside Maher.

Vizcaino has been on four teams since 2020, including two different squads this season. He made two field goals and all three extra points in his one game with the Cardinals, and only handled kickoffs in a game played with the Patriots.