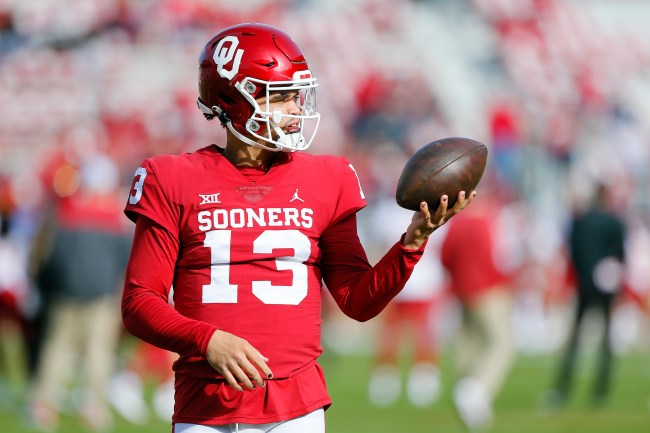 The quarterback situation in Norman, Oklahoma was anything but orderly in 2021. Spencer Rattler began the year as a Heisman Trophy candidate and now he is no longer with the program while true freshman Caleb Williams’ future remains up in the air.

However, despite speculation that Williams may choose to enter the transfer portal, it sounds like he will be the guy in 2022. Sooners head coach Brent Venables spoke about his team’s future at the position and seemed optimistic that nothing was going to change.

Oklahoma, which will play Oregon in the Alamo Bowl on December 29, is undergoing a period of transition. Former head coach Lincoln Riley is off to USC and Venables, the former defensive coordinator at Clemson, is taking over.

Prior to his departure, Riley made one of the biggest decisions of the college football season. After Rattler struggled during one-possession wins in four of the team’s first five games, he went to the bench against Texas.

Down 28-3, Williams took over behind center and led the largest comeback in Red River Shootout history. The true freshman, five-star recruit from the Class of 2021 retained his starting role for the rest of the year, but did not finish the season as strongly as he might have hoped.

Oklahoma lost two games, missed out on the Big 12 Championship and the College Football Playoff. Even with the the slight late-season downswing, Williams finished with 1,670 yards passing and 18 touchdowns through the air on 115 completions in six games. He also added 408 yards and six scores on the ground.

Now his future is up in the air, kind of.

When Riley left, there was speculation that Williams might join him in Southern California. Williams had the following to say after the news was announce:

I appreciate all the concerns about the situation but I am also happy for Coach Riley, mama Riley, Sloan and Stella for that huge opportunity ahead. That’s all I plan to say right now! #boomer

Since then, Williams has been involved with Oklahoma’s bowl practice and has been active on campus in Norman.

During a recent appearance on The Podcast on the Prairie, Williams offered the following comments about Riley:

“I like Riley, I’ve always liked Riley as you know,” Williams said. “I mean I came here to be coached by him. Happy for him, his family, that situation that they are at. I haven’t been mad at the guy, I was just a little surprised by it.”

He also discussed the Venables hire:

What Williams has not done, is give a definitive answer about whether he is staying at Oklahoma or plans to enter the transfer portal.

The 50-year-old head coach spoke with News9’s Dean Blevins and confirmed that he does not expect Williams to enter the transfer portal.

“Do you think Caleb Williams will be at Oklahoma this spring and fall? Do you think you’ll have him?” asked Blevins.

In response, Venables was strong in his answer, but did not want to speak on his quarterback’s behalf.

“Well, I do. I’d be surprised if he wasn’t,” Venables said. “But you’d have to ask him. He’s a wonderful young man, he’s incredibly talented. I do believe that he and his family have tried to plant their roots right here and make this home. And so hopefully that’ll continue to be a huge part of who they are, from a Sooner family and the connectivity that I feel like has been established. I think that the best version of Caleb Williams, combined with a supporting cast, coaching, playing, offense, defense can be a wonderful marriage.”

With Rattler gone, Williams is the incumbent. It is his job to lose and it would be a surprise to see him move on— unless he joined Riley at USC. He will likely provide a definitive answer on his own future after the Sooners’ bowl game.