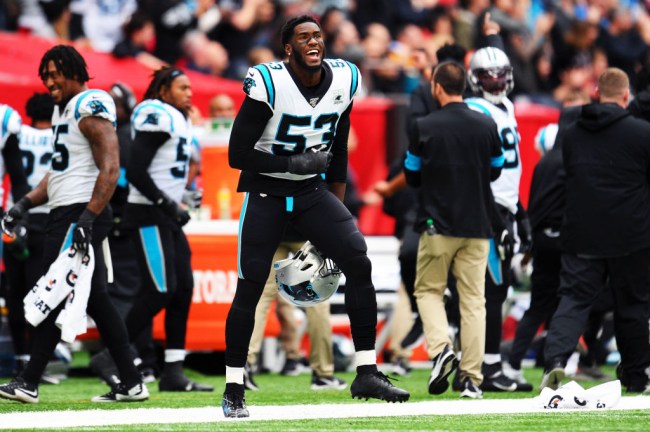 Here’s a look at the Spiderman facemask:

Ok, so it’s totally awesome and definitely something we’ve never seen before. There’s something about unique helmets and facemasks that always gets any football fan pumped up and this one may be the wildest one yet.

Burns hits the Spiderman pose every time he gets a sack so he decided to get a facemask that fits his alter-ego.

I also can’t be the only one asking myself how the hell is he going to see out of that thing, but that’s not really anything he’ll have to worry about because he won’t be allowed to wear it during games due to NFL rules.

This could very well start a new trend where players get bizarre facemasks just to wear them during pregame to get some cool photos. It may be dumb, but it’s also 2019 and that’s the world we are living in.

Sidenote: if Madden or if the new NCAA football game ever comes back, this facemask has to be available when customizing players. Call it some generic name, it doesn’t have to be called Spiderman, but it needs to be made available.

Burns, the 16th overall pick out of Florida State, has 15 tackles, 4.5 sacks, and one forced fumble this season for Carolina.