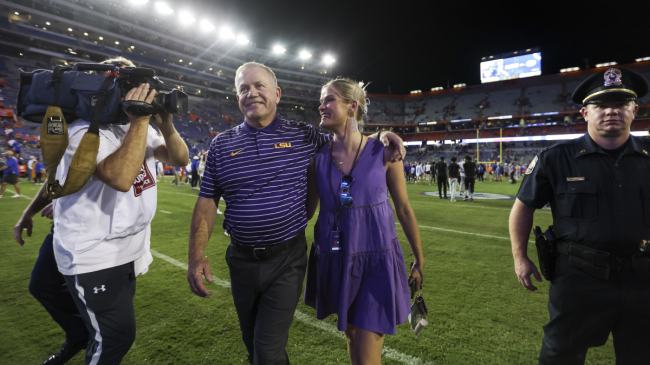 Brian Kelly and the LSU Tigers made headlines this weekend for a big win in The Swamp. The team took down Florida 45-35 on Saturday to land its fifth win of the season, giving Kelly a marquee victory in Year 1.

LSU put on an offensive showcase, totaling 528 yards in Gainesville. Quarterback Jayden Daniels threw for three scores while rusher Josh Williams notched a 100-yard performance. It was one of the more complete showings from the unit, and something that fans are hopeful continues with Kelly now at the helm.

As is the case in many SEC venues, the opposing crowd can be uninviting. Ben Hill Griffin Stadium is no different, becoming revered as one of the tougher environments to play in in the Southeastern Conference.

Brian Kelly’s daughter, Grace, got her first experience in the Swamp, and she didn’t take kindly to her welcome from Florida fans.

Brian Kelly’s daughter ripped the fanbase in a NSFW TikTok video, calling them all a**holes.

That video is now going viral on social media. Here’s what she had to say after her first visit to Gainesville.

“I just wanted to come out here and say that whoever said that Florida fans suck, they were right. Like these guys are a**holes.”

After getting reported by someone on the app, she followed her displeasure with the fanbase up by posting another clip.

It’s okay you got next year #lsu #geauxtigers

It’s not the first time Grace Kelly has gone viral. She posted a video following her dad’s abrupt decision to leave Notre Dame for LSU last offseason that gained popularity online. In that instance, though, she made fun of her father, not an entire fanbase.

The Tigers face off against Ole Miss next weekend as they look to make it two in a row in SEC play.