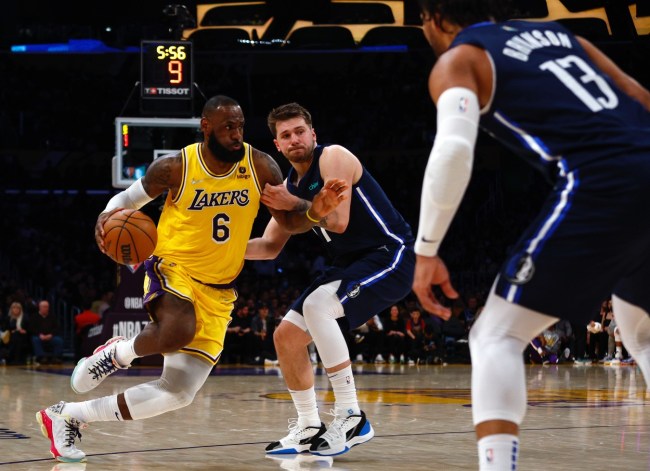 LeBron James recently stated that Steph Curry is the one player he’d like to team up with the most at some point in the future, but one NBA insider thinks we should keep another superstar guard in mind.

ESPN’s Brian Windhorst joined ‘Get Up’ on Thursday morning and made quite the suggestion when it comes to possible future teammates for James. Windhorst seems to think that James could look to team up with Dallas Mavericks guard Luka Doncic.

The reason why Windhorst believes LeBron wants to link up with Doncic? He’s drafted him all three years in the NBA All-Star Draft.

“He’s drafted Luka Doncic all three years he’s been an All-Star,” Windhorst said. “He tried to recruit Luka Doncic to his brand within Nike a few years ago, Luka picked the Jordan brand instead. He, I think, would also love to play with Luka.”

“If you want to enter the fantasy realm, (LeBron playing with Luka) is more worthy of having a discussion.”

.@WindhorstESPN says to keep the idea of LeBron and Luka teaming up in your back pocket 👀

"The best way you can see how LeBron feels about people is who he drafts in his All-Star draft. … He's drafted Luka Doncic all three years he's been an All-Star." pic.twitter.com/L5l9KIReSj

It goes without saying that if Luka and LeBron were to team up, on any team around the league, they’d be one of the most exciting duos in the NBA. This is pure speculation from Windhorst but isn’t too far-fetched to imagine both James and Doncic may want to team up at some point in the near future.

LeBron in Feb. when I asked why he made a point to draft Luka Doncic to 3 straight All-Star teams: “Because I love everything about him.”

Lakers out of the picture, gotta talk about Lebron’s next landing spot because nothing else is happening in the NBA worth talking about https://t.co/ogsaj1usdf pic.twitter.com/GAyhJP550J

They just say anything on these shows https://t.co/Wx4hbfUB0F

How about we pay attention to the awesome basketball we're about to see in next week's playoffs rather than talking about LeBron playing with someone who just signed a five year contract https://t.co/SiOwGPmmix