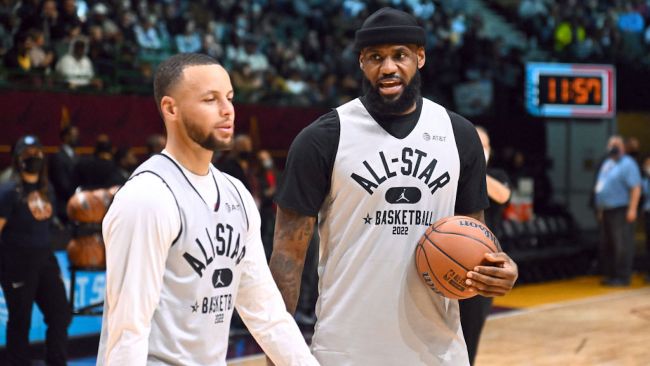 During a recent episode of HBO’s sports talk show The Show, LeBron James listed fellow MVP and generational talent Steph Curry as the active NBA player he’d most like to play with.

“I love everything about that guy,” LeBron said of Curry while rationalizing his answer. “When he gets out of his car, you better guard him — right from the moment he pulls up to the arena. You might wanna guard when he gets out of the bed. Swear to God. He’s serious.”

Unfortunately for the now 37-year-old LeBron, it doesn’t sound like Curry is in all that much of a rush to do the same, as he recently said “I’m good” when asked if he’d like to team up with the future Hall of Famer anytime soon.

LeBron’s comments come as he misses the playoffs for just the fourth time during his legendary career, as he and the Los Angeles Lakers were eliminated from playoff contention following Tuesday night’s loss to the Phoenix Suns. The Lakers season was such a failure, in fact, that some NBA fans are calling them one of the most disappointing teams in the history of the league.

James, who will turn 38-years-old before the end of 2022, has been open about the fact that he wants to play with his son Bronny James, who cannot enter the NBA Draft until 2024.

RELATED: Lakers Are Being Called The ‘Most Disappointing Team In NBA History’ After Team Officially Gets Eliminated From Play-In Tournament