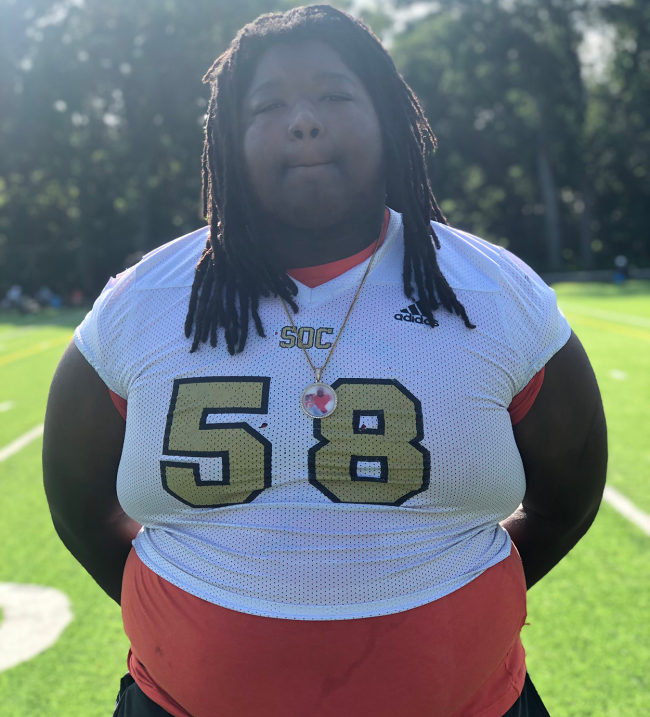 Class of 2023 offensive line prospect Brione Ramsey-Brooks is better known as ‘Big Bubba,’ or just ‘Bubba.’ The Dallas, Texas-native is quickly skyrocketing up recruiting boards because not only is he absolutely massive, but he is extremely dominant.

Although he is currently unranked on recruiting websites, he has offers from Deion Sanders and Jackson State, as well as Kansas, Arizona, Georgia Tech, and Houston, among others. Ramsey-Brooks might be flying under the radar for Power Five programs, but wherever he ends up, he is going to provide a sizable impact — literally — on the offensive line right away.

As a sophomore, Ramsey-Brooks was a first-team all-district selection. Considering that he plays in one of the largest football hotbeds in the country, that is quite the honor for an underclassman.

As a junior, Ramsey-Brooks one-upped himself. He was a Class 5A first-team all-state selection and helped South Oak Cliff High School to a 15-1 record and the Class 5A-II state championship.

Now, as he starts to narrow-in on his college decision, Brione Ramsey-Brooks is turning heads at camps.

The massive prospect is finishing up his junior year this spring. He will have all of the fall to prove himself before making a decision.

Should he want to commit early, he could sign as soon as December. If he wants to wait until the last possible second, he has until Feb. 1, 2023.

Ramsey-Brooks recently partook in the Rivals recruiting camp in Dallas and was bodying everybody. His performance was remarkable.

Brione "Big Bubba" Ramsey-Brooks @BrioneBrooks is blowing up the internet after his performance @RivalsCamp Dallas.

Opposing defenders simply could not get past Bubba.

He was talking big talk, could not have been more fired up and was simply out-working all of the defenders who tested him.

Came in and used his huge upper half to bully his way into defenders, and chirped a little bit too to throw some energy in the morning session.@BrioneBrooks | @RivalsCamp pic.twitter.com/oJUH8WNEZw

It was violent in the best way possible.

Big Bubba Brooks has a lot of time left to figure out where he is going to play college football. Whatever school he chooses will be thrilled to have him.