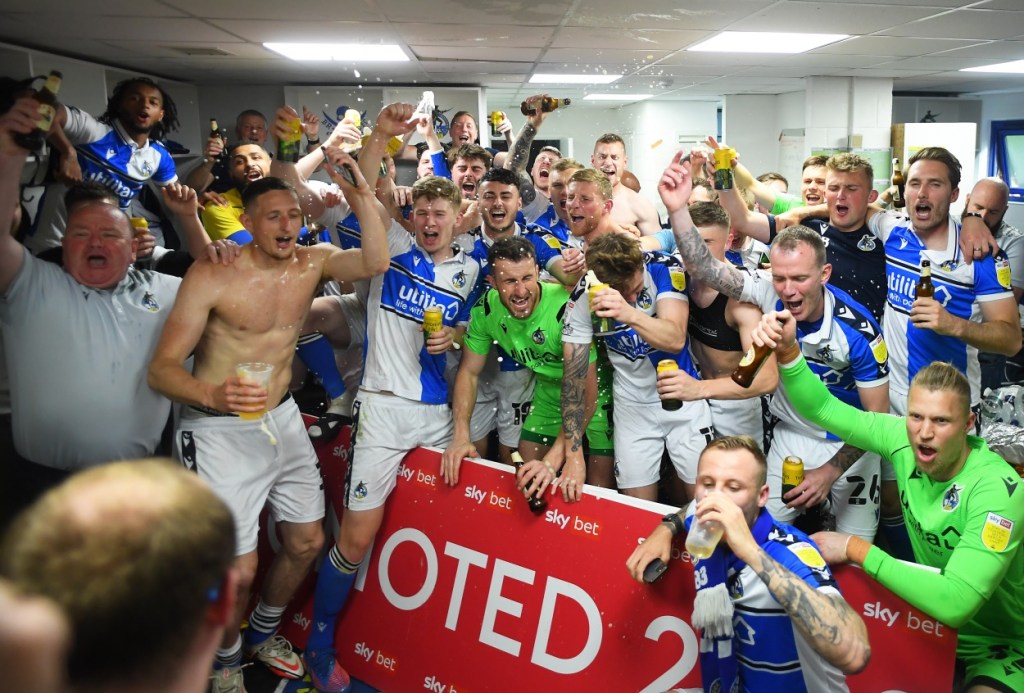 Congratulations are in order to the Bristol Rovers who just secured promotion from the EFL’s League Two up to League One. The team secured a 3rd place finish on the final match day of the season after a massive 7-0 win over Scunthorpe who finished the season 24 out of 24 and got relegated the National League (5th tier).

There is some drama surrounding the 7-0 and an official complaint is being made to the EFL but we’ll get to that after check out out this electric celebration. Bristol Rovers striker Aaron Collins who wears the #10 jersey shared footage from the mayhem after the thrilling soccer match.

Aaron Collins was seen climbing a lamp post, chugging a beer, and dumping the rest of it on his head and the raucous Bristol Rovers supporters below as the crowd was singing at the top of their lungs. The Bristol fans and players earned every bit of this celly but as an American, it’s still startling to see the players going wild like this WITH the fans in the streets.

Here are some other scenes from the Bristol Rovers celebration as they cherished the moment.

This aerial view of supporters swarming the pitch after they secured the 7-0 win and promotion is just an incredible look at the moment of catharsis:

What about that Bristol Rovers drama???

I mentioned above that there was some drama involved with the Bristol Rovers being promoted to League One. James Piercy of the Bristol Post reported that Northampton Town, the team who finished in 4th place, is filing a complaint with the EFL (the sport’s ruling body in England).

The team that Bristol beat 7-0 was Scunthorpe United who finished in dead last in League Two. Scunthorpe had 4 wins, 14 draws, and 28 losses on the season. They finished with a -61 goal differential and only earned 26 points (compared to 80 for Bristol).

The Bristol Rovers finished with 80 points, tied with Northampton Town, AND they were tied on goal differential at +22. So the tie breaker came down to Goals Scored and Bristol scored 71 while Northampton scored 60. Thus Bristol got the promotion up to League One and Northampton is now part of a mini-tournament for the 4th spot of promotion.

The drama comes in here: Northampton is alleging that Scunthorpe United, the last place team the Bristol Rovers beat 7-0, rolled out an illegitimate squad of youths. Their claim is suspect but Northampton’s claim is there were SEVEN teenagers on the starting team for Scunthorpe and they are questioning the ‘integrity’ of the game.

Having seven teenagers start on a professional squad is certainly eye-raising. Scunthorpe’s starting goalkeeper for the match was Owen Foster (born in 2005) who only played in 2 games all season. But it remains to be seen what the complaint filed by Northampton Town will reveal if anything.