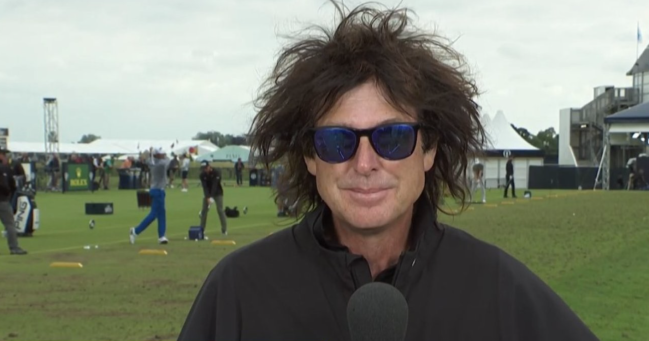 On the eve of the 2021 Open Championship, the golf world wasn’t talking about whether or not Jon Rahm could win his second consecutive major, if Jordan Spieth could lift the Claret Jug for a second time, or any of the other marquee storylines heading into the week. No, everyone was talking about a man named Paul Larsen.

Royal St. George’s is known for its quirkiness, so it’s only right that Larsen, the head greenskeeper of the course, has some unique characteristics of his own.

The world was introduced to Larsen during a Golf Channel interview on Wednesday and the longtime greenskeeper instantly turned into a legend with his messy hair and sick shades.

Yeah, expect things to get weird this week, folks. pic.twitter.com/AfoUv5wWU9

Based on his social media accounts, Larsen has been the head greenskeeper at Royal St. George’s since 2010. This means he was the man in charge during the Open’s last appearance at the course in 2011 when Darren Clarke hoisted the Claret Jug.

Larsen became a celebrity on Twitter in no time.

Is "head greenskeeper" a euphemism for lead singer in an 80's rock band? https://t.co/SnsUflpiEE

Doc Brown drove his DeLorean into the future and became a greenskeeper 😂😂😂 https://t.co/eszpldVJa5

This is Paul Larsen, head greenskeeper at Royal St. George's.

My man's got fescue hair pic.twitter.com/cbLBTBPa69

Plenty of people on Twitter immediately made the comparison to Alice Cooper, but personally, I think he looks exactly like Paul Azinger with a wig on.

It’s going to be great to see what Larsen has in store for the game’s best at Royal St. George’s this week. Let’s hope we get to see more of Larsen throughout the tournament and he receives a personal shoutout during the winner’s speech come Sunday afternoon.