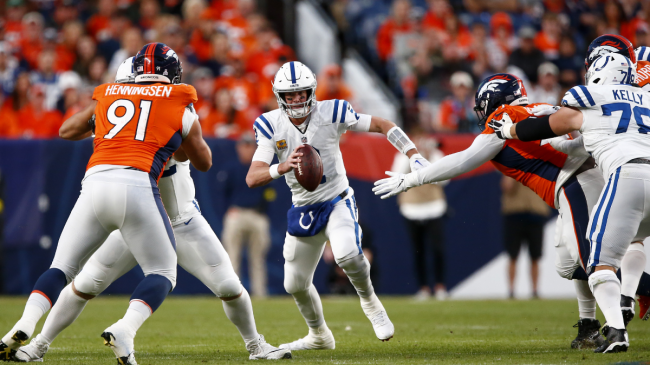 One lucky gambler cashed out a major bet on Thursday night following the Broncos-Colts game.

In what was a snoozefest of a game, this gambler found a prop that made watching the awful showing somewhat enjoyable. They wagered that neither team would score a touchdown. The odds on that bet were 100/1.

Most everyone who actually watched the game from start to finish was livid about having to see two putrid offenses in a primetime snorer.

Both passers threw a pair of interceptions, with Russell Wilson tossing a pick in the final three minutes of regulation as the Broncos drove for a game-sealing touchdown. The Colts went on to kick a game-tying field goal after that Stephon Gilmore turnover, making this bettor wait through an overtime.

OT would be exciting (for this game, at least), as the Colts marched down the field to take a 12-9 lead on the opening drive. Denver would then drive inside the five-yard line before getting stopped on a fourth-and-one play.

Rather than run the football on that fourth-down play, Denver put the ball in Russ’s hands, which gave Amazon analyst Richard Sherman flashbacks to the 2014 Super Bowl.

It was a truly fitting end to the boring matchup.

After sweating out the final play, the bettor’s ticket cashed in with neither team reaching the endzone. At 100/1 odds, this $100 wager quickly turned into a $10,000 payday.

At least there was one winner in this awful Thursday night contest.

Related: America unloads on the NFL for having to watch the Broncos in primetime, again.