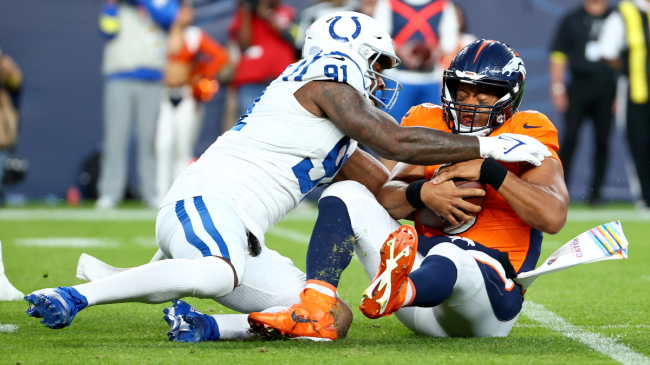 America is PISSED at the NFL after being forced to watch the Broncos in primetime yet again. Through five weeks of the season, Denver has landed a primetime slot three times.

The season opener saw Russell Wilson fall 17-16 to his former team in Seattle, and while many were happy to see the former Seahawk lose, the game left much to be desired.

Things got even worse in Week 3 when the Broncos and 49ers played a game of “Who wants to lose more?” Denver would eventually win an 11-10 snoozefest, though Wilson and the offense heard their fair share of boos from the home crowd.

Unfortunately, round three of Broncos’ primetime matchups has been a disappointment, too.

Through two quarters of action, the Broncos lead the Colts, 6-3. Russell Wilson has thrown for 79 yards while Matt Ryan has 140 yards and a pick. Nobody’s been able to reach the endzone.

Fans who haven’t died from boredom have been posting their dismay on social media. Take a look.

I usually smoke a cigar during the second half. I may go score some meth at halftime for this one.

One social media account said, “The NFL forcing us to watch the Broncos on primetime,” with an aptly attached meme from The Office. Many others shared that same sentiment.

The NFL forcing us to watch the Broncos on primetime pic.twitter.com/8YYi09MsJP

Being forced to watch the Denver Broncos in primetime week after week: pic.twitter.com/GgoG1duB3B

The fans simply wrote, “Stop giving us Broncos primetime!” We can all agree on that.

This person said, “I swear it feels like the Broncos have been on primetime every week.” We are sick of watching Denver in the spotlight.

The DEN Broncos have played in Primetime 3 of the first 5 weeks.

I am sick of watching this team…

Unfortunately, it’s far from the last time we’ll see them in the slot this season. In fact, the Broncos are slated to play next Monday night. Hopefully the product will be a bit better next week, but based on past performance, it’s not looking likely.

Update: A fitting end to an awful game

After halftime, the Colts outscored the Broncos, 9-3, to win in Denver. Despite the matchup going to overtime, neither team reached the endzone, which made at least one bettor happy.

After driving to the five-yard line on their final possession, the Broncos were stopped on a fourth-and-one play, sealing the Colts’ victory.

A truly fitting way to end this terrible game.