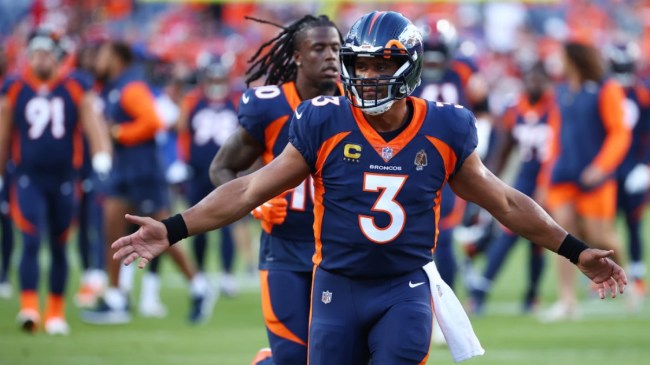 The beginning of Russell Wilson’s time with the Denver Broncos has been tough to watch. The offense struggled badly in the first 2 games with Wilson in charge, scoring just 2 touchdowns total against the Seahawks and the Texans. Then it got way worse in Week 3.

The Broncos welcomed the San Francisco 49ers to Denver for Sunday Night Football this weekend and the game was ugly. Neither team seemed to have any interest in scoring for most of the game and as a result, we saw a lot of both teams’ punters.

There were 17 total punts in the game. 10 of those came from Broncos punter Corliss Waitman, making them the first team in 6 years to win a game where they punted 10 times.

This performance was discussed on the ManningCast on Monday night and Eli Manning remarked that maybe the Broncos should have given Waitman a massive contract extension instead of Wilson.

"They should've paid that punter $235 million instead of Russell [Wilson]." @EliManning went there 😅 pic.twitter.com/ridC2MdRji

Eli has since walked back the comment in a conversation with Front Office Sports.

No, I don’t think we’re trying to be critical. I think we always try to support the guys that are in the game. I think sometimes, ‘Hey, it’s live TV.’ I never try to take a real shot at somebody. I think that was obviously a very outrageous joke — because a punter had 10 punts. Nothing against Russell. He’s going to do great.

Today, Russell Wilson shared his response to the comment from Manning.

Russell Wilson responded to Eli Manning’s joke that the Broncos should have paid Corliss Waitman $250M instead of him.

“You talking about Chad Powers?”

It looks like Russell Wilson gets the last laugh on this one, but he’ll be the subject of plenty more jokes if the Broncos don’t get their offense figured out soon.