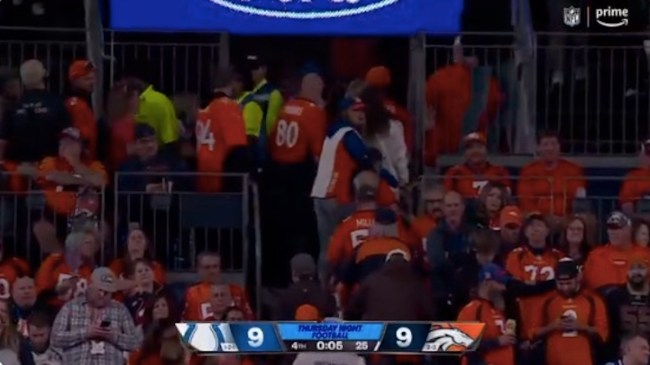 Perhaps realizing they were witnessing one of the worst NFL games ever played (at least as far as modern fans on Twitter are concerned), Denver Broncos fans — clearly fed up with the putridity of the team’s Russell Wilson-led offense — left the stadium in droves as regulation came to an end.

Mind you, this is with the game tied at 9-9, meaning a decisive overtime period was yet to come. And still, that wasn’t enough to entice some frustrated Broncos fans from jumping ship and beating the traffic while they still could.

As the scene was unfolding during the broadcast, Prime Video color commentator Kirk Herbstreit — best known for his college football work with ESPN for the last few decades — simply could not contain his disbelief-filled laughter as he watched the Mile High faithful stream towards the exits.

The sight of Broncos fans heading for the exits in the midst of a tied primetime game on national television is the perfect summation of just how quickly the fanbase is losing patience with $245 million quarterback Russell Wilson, who has wildly underperformed so far this season. Wilson has been so bad, in fact, that he’s being markedly outplayed by signal caller Geno Smith, the longtime backup who replaced him in Seattle as the team’s starter.

With their next game not coming until Monday, October 17, the Broncos now have 11 days — which is basically a mini-bye-week — to fix their sputtering offense and round into the AFC West contenders that most NFL fans thought they’d be heading into the season.