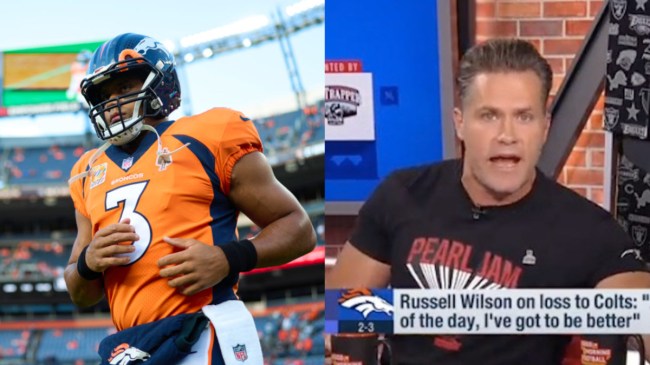 Following another pitiful performance on Thursday Night Football and bizarrely upbeat matra-spewing after the loss, Denver Broncos quarterback Russell Wilson is getting absolutely torched by the football world on Friday morning, including NFL Networks’ Kyle Brandt, who thoroughly shredded the 33-year-old “poser” for being one of the “least authentic” personalities in the world of sports.

Speaking on NFL Network’s Good Morning Football on Friday morning, Brandt not only cooked Wilson for missing a wide-open K.J. Hamler on the final play of the game, but he also delved into the authenticity of Wilson’s personality and how that’s affecting his ability to lead the Denver Broncos offense.

“I think Russell Wilson is one of the least authentic personalities we have in this league,” Brandt said on Friday morning’s episode of Good Morning Football.

“I think Russell Wilson is a poser. And that doesn’t mean he’s a bad person. I actually think he’s a good person. I think he tries to be something that he’s not and when you make $245M, you either got to be a really great guy with the locker room or you’ve got to be an amazing player.”

“Brady, who makes half of what Russell’s making, is both. Rodgers, Patrick Mahomes, both. Allen, people love him, he’s amazing. Kyler Murray, we’ll find out. First of all, the Broncos’ fan base has no history with him, no allegiance to him, this is not a Seahawks thing that they drafted him and they grew up and he’s their guy. None of that.”

The popular NFL Network personality then detailed an experience he had working the red carpet at the NFL Honors where most of the players in attendance came to say hello to him, except for Wilson.

“I worked [the red carpet at] the NFL Honors. Kelce comes by. Rodgers comes by. Russell Wilson shows up with his sunglasses and his wife, and I think they think they’re Jay-Z and Beyonce and they will literally put their hand up and say ‘No, we’re not talking.’ Why? Because you think you’re that cool and that famous and that amazing and everything is so perfect. That does not work in a locker room.

Brandt’s rant about Wilson is just one of many hot takes pouring in about the QB following the disgusting Thursday Night Football performance against the Colts, as some NFL fans are wondering if it was literally the worst NFL game ever played.

Wilson and the 2-3 Broncos now have 11 days to clear their heads and prepare for their Monday Night Football matchup against Justin Herbert and the Los Angeles Chargers on October 17.

RELATED: Broncos WR Who Was Wide Open On Final Play Fires Shot At Russell Wilson, Says He Could’ve ‘Walked In’ To The End Zone