Broncos WR Who Was Wide Open On Final Play Fires Shot At Russell Wilson, Says He Could’ve ‘Walked In’ To The End Zone 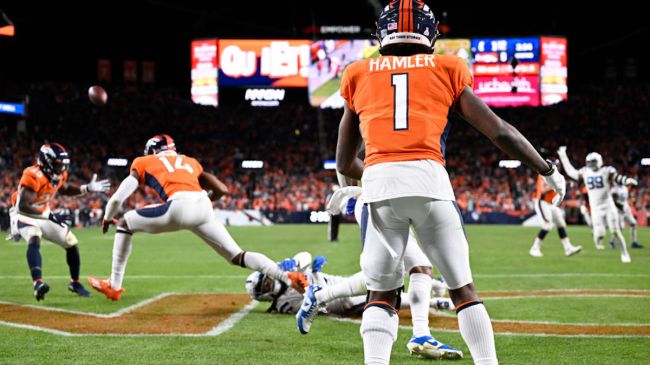 Last night’s Thursday Night Football game between the Denver Broncos and Indianapolis Colts, which finished with a final score of 12-9, might have set the sport of football back a decade as some NFL fans are legitimately wondering if it’s the worst game they’ve ever seen.

Despite the putrid quality of play on the field, the Broncos — who have wildly underwhelmed with $245 million man Russell Wilson as their quarterback so far this season — had a chance to win the game on 4th and 1 from the Colts five yard line with time winding down.

Instead of running the ball, though, the Broncos elected to throw and put the ball in Russ’ hands, who ultimately threw an incompletion that sealed the victory for the Colts.  It didn’t have to end that way, though, as Wilson had pass catcher K.J. Hamler WIDE OPEN on the play. So open, in fact, that even regular folks sitting on their couch at home took notice.

And the @Colts walk away with the W in OT. #INDvsDEN on Prime Video
Also available on NFL+ https://t.co/qcjXnKGOp7 pic.twitter.com/rApHGVBy70

KJ Hamler was slamming his helmet after the game. For good reason… pic.twitter.com/l5BbcyEeGt

Broncos wide receiver K.J. Hamler tells reporters he could have “walked in” to the end zone had QB Russell Wilson thrown him the ball

Speaking to reporters after the game, Hamler — who has just two catches for 65 yards so far this year, and 37 for 520 across his three-year career so far — perhaps taking a vague shot at Wilson, said that he could have “walked” into the end zone had the ball been passed to him.

“I could have walked in,” Hamler told James Palmer of NFL Network.

After just five games in a Broncos’ uniform, patience with Russell Wilson seems to be running thin in the Mile High City as fans were spotted leaving the Thursday Night Football game against the Indianapolis Colts prior to its official conclusion.