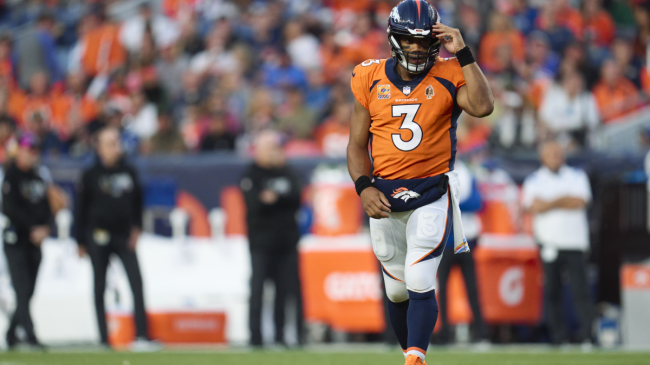 Russell Wilson is making headlines after a dismal performance on Thursday Night Football. The passer looked awful, particularly in the second half, leading to a 12-9 defeat at the hands of the Colts.

The Denver quarterback finished the day with a 54% completion percentage and a pair of picks. One of those interceptions came as the Broncos attempted to seal the game in regulation. The team was up 9-6 with the ball in the redzone. Rather than run the ball on third-and-short, Denver opted to throw.

Wilson was picked in the endzone by Stephon Gilmore.

Indianapolis would drive down the field to tie the game and send it into overtime. They’d then take a 12-9 lead after their opening drive of the final period.

But things started to look up for the Broncos when they got the ball. Wilson completed a few big passes to get the ball to the five-yard line. Unfortunately, they’d be stopped on a third-and-short, bringing up a fourth-and-one situation.

Head coach Nathaniel Hackett decided to go for the win rather than the tie, sending the offense back onto the field. Denver called a pass play as opposed to a run, much to the disdain of analyst Richard Sherman, but a touchdown was there for the taking.

Wilson never saw the open man, though, which led to him throwing into coverage. Gilmore made another play to bat the ball down and secure a Colts win.

Now, the NFL world is roasting Russell Wilson for not hitting the open receiver.

Many on Twitter were quick to react after seeing Russell Wilson miss the open man on the final play of the game. Wide receiver KJ Hamler ran a rub route, fooling a pair of Indianapolis defenders. He was all alone at the goal line, but his quarterback couldn’t get him the ball.

Take a look at what folks were saying after the Broncos’ loss.

One account posted, “How did Russ not see him?!” along with a snapshot of the missed play.

How did Russ not see him?! 🤯 pic.twitter.com/A9yQuKYmkx

Another wrote, “KJ Hamler couldn’t have been more open.” Everyone saw him but Wilson.

It was another rough outing in what’s been a forgettable season for the Denver signal caller.